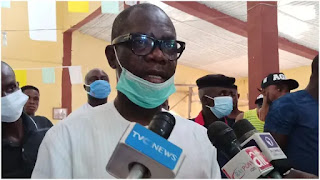 The Deputy Governor of Ondo State and the candidate of Zenith Labour Party, ZLP, Hon Agboola Ajayi has accused Governor Oluwarotimi Akeredolu of mismanaging the funds meant for the development of the oil-rich region of the state.
Ajayi who spoke in Igbokoda, Agadagba and Igbekebo in Ilaje and Eseodo Local Governments Area of the state as part of his campaign tour said the fund meant for the development of the Ondo State Oil Producing Area Development Commission, OSOPADEC, is in the purse of few individuals in the state.
He asked the governor and the management of the intervention agency to account for billions that came to the state from the 13 percent that had accrued to the state from the federation account.
He, however, promised to prevent the stealing of the fund meant for the development of the Ilaje and Eseodo Local Government if elected as governor of the State.
Also, he promised to increase the allocation meant for the development of the region if elected as the governor of the state saying the present 40 per cent out of the 13 percent for the State is grossly inadequate.
Ajayi said one of the reasons he fell out with Akeredolu was the mismanagement of the fund accruing to the state for the development of the oil-rich region.
He promised to address the difficult terrain of both Ilaje and Eseodo if given the opportunity to govern the State.
His words “God will not forgive those who steal our fund in OSOPADEC. It is unfortunate that this government cannot point to one project executed with our fund in the past three and a half years.”
Ajayi said the way Akeredolu treated him as his Deputy showed there is nothing special about being Deputy Governor. He said the prompt release of OSOPADEC fund is far better than being a lame duck Deputy nominated by the wife of the governor.
He said “I am not going to treat my Deputy the way Akeredolu treated me. I am the one that said I am not interested in Deputy. The wife of the governor now nominated Lucky Ayedatiwa as the running mate of her husband.”
Meanwhile, Ajayi debunked the rumour that he is allying with the People’s Democratic Party, PDP, ahead of October 10 governorship election.