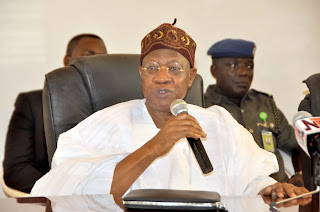 The federal government says Nigeria’s 60th Independence Anniversary is worth celebrating.
Minister of Information, Lai Mohammed, stated this in a statement on Thursday.
He noted that some wonder why Nigeria needs to celebrate its Diamond Jubilee, considering the myriad of socio-economic challenges.
Mohammed said the answer to that their doubt is contained in the anniversary theme – ‘Together’.
“For a country that has gone through a bitter, internecine civil war, years of political crisis, daunting security challenges, including religious and ethnic crisis, etc, our unity and our resilience are worth celebrating.”
The minister pointed out that in certain cultures, the age of 60 is seen as the beginning of a new cycle of life, and is usually well marked.
He declared that administration of President Muhammadu Buhari offers a new beginning.
Mohammed said the government is laying the blocks for industrial and technological development by building massive infrastructures power, roads, bridges, rail, and by developing human capital.
The minister added that the Buhari administration is fighting corruption, tackling insecurity, and diversifying the economy by leveraging ICT, the creative industry, agriculture, mining, among others.