Man sentenced to one year imprisonment for abducting applicant

A Magistrates’ Court in Wuse on Thursday sentenced a 34-year-old welder, Abdulganiyu Abdulazeez, to one year in prison for abducting and... 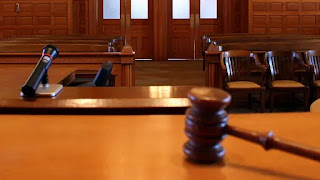 A Magistrates’ Court in Wuse on Thursday sentenced a 34-year-old welder, Abdulganiyu Abdulazeez, to one year in prison for abducting and defrauding an applicant of N522,000.
The prosecution counsel, Mr Seidu Jibrin told the court that on Aug. 29, a rapid response squad attached to the Kabusa Police station arrested Abdulazeez, and Busayo Areo of ECWA II Kabusa village, Abuja.
Jibrin said that the accused and his accomplice, Busayo criminally deceived and abducted Miss Judith Elechi.
He also said that Abdulazeez and Busayo collected N522,000 from Elechi, with a promise to get her a job in Libya.
According to him, this contravened the provisions of sections 97,312 322, 277 and 292 of the Penal Code.
The Magistrate, Aminu Eri, while delivering judgement sentenced Abdulazeez, following his guilty plea, to one year imprisonment without an option of fine.
Eri also ordered him to pay N200,000 as compensation to the victim.
The magistrate admitted Busayo to bail in the sum of N300, 000 with one surety in like sum.
He, however, adjourned the case until Nov. 18 for hearing, NAN reports.