Widow cries out to Enugu Police, others over ejection from husband’s house

A widow, Mrs. Annabel, Muoneke, from Nawfia, in Anambra State has cried out to authorities over alleged harassment by her late husband’s... 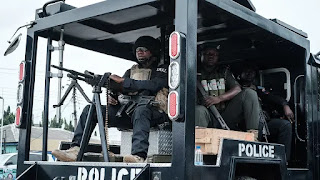 A widow, Mrs. Annabel, Muoneke, from Nawfia, in Anambra State has cried out to authorities over alleged harassment by her late husband’s brother.
The mother of one raised the alarm in a petition filed on her behalf by a human rights organization, Civil Rights Realisation and Advancement Network (CRRAN), signed by its president, Olu Omotayo (Esq).
The petition was addressed to the Speaker of the Enugu state House of Assembly, Edward Ubosi, the Enugu State Commissioner of Police, Amad Abdur-Rahman, and Commissioner for Gender Affairs and Social Development, Princess Peace Nnaji.
She alleged that her life and that of her only daughter are presently in danger.
Among other things, she also alleged forceful eviction from her matrimonial home.
She narrated in the petition that since after the demise of her husband, late Mr. Izuchukwu Okwudili Muoneke, who was formerly resident in the United Kingdom, (UK), but died on the 13th, of July 2019, the younger brother to the deceased, Chimezie, Muoneke, has continued to make life unbearable for her and the daughter.
The petition entitled: ‘Appeal for Justice: Re: Forcible Entry And Eviction, Threat to life and victimisation of Mrs. Annabel Muoneke, a widow, by Mr. Chimezie Muoneke,’ appealed to the above authorities to come to the help of the widow.
According to the petition: “We write to you in respect of the above mentioned matter on behalf of Mrs. Annabel Muoneke of No. 1, Okwudili Muoneke Crescent, Sunrise Estate, Emene, Enugu.
“Mrs. Annabel Muoneke lost her husband Izuchukwu Okwudili Muoneke on the 13th day of July 2019, after a brief illness. The deceased who was formerly resident in United Kingdom had 2 children namely Jesica Muoneke (18 years) and Victoria Muoneke (15 years) before he got a divorce and separated from their mum and came back to Nigeria.
“Mrs. Anabel Muoneke had a daughter named Michelle Muoneke for her late husband. After the burial of the deceased in his hometown Nawfia in Anambra State on the 5th day of December 2019, Mr. Chimezie Muoneke a younger brother of the deceased started threatening the poor widow to vacate her matrimonial home, stating that the deceased sold their fathers’ property to build the said house, therefore, the building, a bungalow, is a family house.
“Mr. Chimezie immediately after the burial of the deceased broke into the Muoneke home on the 7th December 2019, and took possession and only allowed the lady to stay in a room after much pressure.
“Mrs. Muoneke said she wrote a petition to the office of the Commissioner of Police through her lawyer on December 2019, the matter was referred to SIB for investigation, but the matter was never resolved.
“On 6th September 2020, Mr. Chimezie again in concert with some people started threatening to throw Mrs. Muoneke out of the property and kill her and her only daughter.
“Mr. Chimezie was also sending threatening SMS messages to the poor widow. These threats made Mrs. Muoneke to write another petition again to the office of the Commissioner of Police Enugu State, on the 9th September 2020, and the matter was
promptly referred to D12 Section, of the State Criminal and Investigation Department (SCID), Enugu where the matter is currently pending.
“On 16th September 2020, Mr. Chimezie threw out Mrs. Muoneke and her little daughter from her matrimonial home, seized some of her properties and threatened to kill her and her daughter. The Police on Friday 18th September 2020, directed that Mr. Chimezie should open the premises and allow Mrs. Anabel have access to a room in her matrimonial home pending investigation, which directive was carried out with the assistance of the Police and she now stays there for now.
“We seek your urgent intervention in this case, as it is grave injustice to say a widow and her daughter cannot stay on her matrimonial home upon the demise of her husband.
“Mrs. Annabel maintained that there is no iota of truth in the claim of Chimezie that her matrimonial home is a family property as all the documents relating to the property bears her late husband’s name.
“We submit that the victimization, harassment and threat to the life of this poor widow and her daughter should be stopped forthwith. We also urge you to in the interest of justice ensure that Mrs. Anabel and her child get justice as the circumstances of this case demands.
“There is no law in Nigeria that says upon the demise of a man his property automatically becomes family property.”
When got in touch with the widow’s brother-in-law via his mobile line, he said the petitioner was not his brother’s wife.
Responding to question put to him over allegedly chasing the widow out of the husband’s property, he shouted “Jesus Christ; did she tell you she is my brother’s wife? She s not.
“Her name is Annabel Okafor not Annabel Muoneke. My brother’s wife is in London. That’s all I have to say.”