Committed to ensuring the promotion of accountability, transparency and probity in the runing of Ministries, Departments and Agencies of Gov... 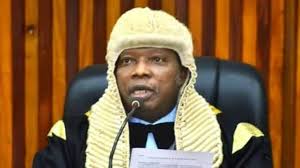 Committed to ensuring the promotion of accountability, transparency and probity in the runing of Ministries, Departments and Agencies of Government, Ogun State House of Assembly through its Committee on Public Accounts and Anti-Corruption has examined the financial records of the State Ministry of Environment between the year 2015 and 2019 with a request for supporting documents on some revenue heads and capital projects within the period.

The Chairman of the Committee, Hon. Lamidi Musefiu, in company of other lawmakers including Honourables Abdul Bashir Oladunjoye, Ganiyu Oyedeji, Abayomi Fasuwa and Kunle Sobunkanla as well as the Deputy Speaker, Oludare Kadiri, while considering the audit reports of the Ministry and other records presented by the Permanent Secretary in charge of the Ministry, Mr. Raimi Ojetola, noted that the exercise was to clarify the issues raised in the audit reports in line with the International Public Sector Accounting Standards (IPSAS) and other financial regulations within the period under review.

The House  Committee observed that among other issues raised  in the audit reports were poor management of the stores, as store received vouchers and the issued vouchers were not maintained, thus materials purchased were not usually distributed with proper store accounting procedures which subjected the ministry to avoidable losses thereby contravening the Financial Regulation Act.

The Chairman also disclosed that the Auditor General discovered that a sum of N200m was disbursed for "Special Projects", while no analysis was given as to how the fund was disbursed.

Consequently, Lamidi directed the Ministry to immediately avail the committee with supporting documents including explanatory notes on revenue lines, especially Registration of Business fees, Sewage Management and Environmental Hazard Charges, Mast Charges as well as other fines in the period under review.

Other documents requested by the lawmakers are supporting documents on the budget heads of Environmental Impact Assessment (EIA) fees, environmental development, cleaning and fumigation and erosion control projects carried out during the period under review.