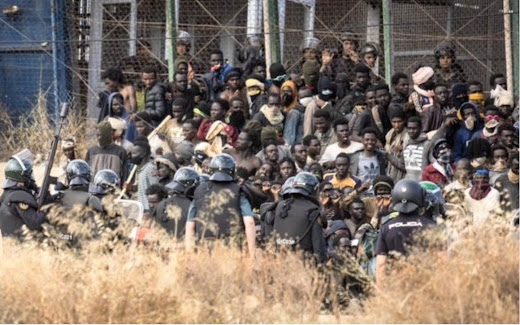 The deaths of dozens Africans trying to cross from Morocco into Spain have sparked global condemnation.

Last Friday, 2,000 migrants, mainly from Sudan, tried to cross the barbed-wire fence at the militarized border the North African country and city of Melilla share.

Scores of Moroccan and Spanish officers resisted them with force leading to the loss of at least 23 lives.

Videos on social media show piled up bodies of the victims allegedly shot by Spanish police and truncheoned by Morrocan police.

His statement expressed deep shock and concern “at the violent and degrading treatment of African migrants attempting to cross”.

Mahamat stated that the ensuing violence caused the deaths of at least 23 people and injuries to many more.

The AU leader reminded countries of “their obligations under international law to treat all migrants with dignity and to prioritize their safety and human rights”.

On Tuesday, United Nations (UN) Office of the High Commissioner for Human Rights said the deaths of the migrants should be investigated by both countries.

The office noted that the Africans were reportedly “beaten with batons, kicked, shoved, and attacked with stones by Moroccan officials”.

The spokesperson Ravina Shamdasani said OCHR was “disturbed by the deaths of at least 23 African migrants and injury of at least 76 others”.

She said it was the highest number of deaths in a single incident over many years of migrant heading to Morocco to Europe through Melilla and Ceuta.

Shamdasani urged Morocco and Spain to ensure that migrants’ human rights were protected at their joint border, and that officers refrain from use of excessive force.

The official urged the AU, European Union (EU) and other relevant international actors to ensure human rights-based border governance measures are in place.