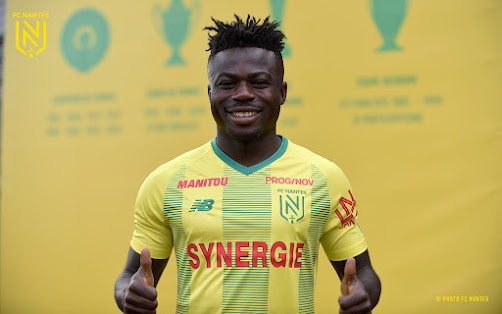 Moses Simon is thrilled to wear the captain’s armband in Nigeria’s 2023 Africa Cup of Nations qualifying tie against the Falcons of Sao Tome and Principe.

The Nantes of France winger was named captain as the Super Eagles cruised to a 10-0 victory against Sao Tome and Principe at the Adrar Stadium, Agadir on Monday afternoon.

It was Nigeria’s biggest win in international football.

Team captain, Ahmed Musa was named among the substitutes, while vice-captain, William Troost-Ekong missed the game due to a muscle injury.

Simon led the team by example as he set up Victor Osimhen for the opening goal and scored his side’s second of the game.

“Big honour for me to wear the captain armband of the @ng_supereagles, .A historic win for the team as well. To God be all the glory, “he tweeted.

The 26-year-old has so far scored one goal and provided three assists in two games in the qualifiers.