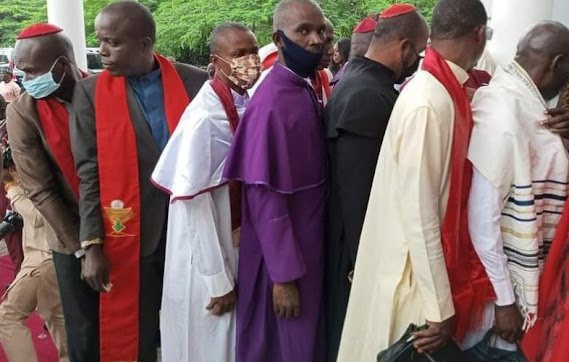 Videos of how some fake bishops allegedly hired by the All Progressives Congress, APC attended the unveiling of Kashim Shettima as the party’s vice presidential candidate has emerged on social media.

Recall that Bola Tinubu, the APC presidential candidate, unveiled the former Borno State governor as his running mate on Wednesday in Abuja.

Shettima, had, during his speech, said about 30 bishops who are patriotic Nigerians were on ground at the event.

Saga Gist reports that the ruling party is currently receiving backlashes from Nigerians for allegedly hiring the bishops, supposedly to include Christians in its bid for a Muslim- Muslim ticket.

In a video obtained by our correspondent, the ‘bishops’, dressed in uniforms resembling that of Christian clerics, refused to speak with the press.

They also refused to reveal their identities or what denomination they represent when asked to speak to Nigerians.

Despite claims by the APC that the so-called bishops were not hired, some of them have come to social media to claim they were paid to dress in the costumes.