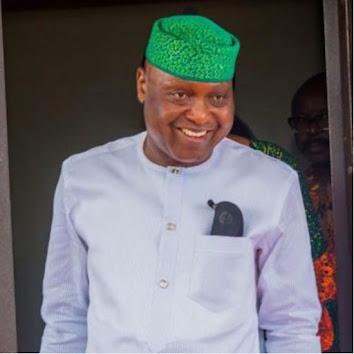 The Special Adviser to the President on Political Matters, Senator Babafemi Ojudu has urged Ekiti State Governor-elect, Mr Biodun Abayomi Oyebanji, to run an inclusive government, even as he said he was convinced Oyebanji has the capacity to reposition the State.

Senator Ojudu, who stated this during a meeting with Oyebanji in Abuja at the weekend, said one of the major tasks before the incoming Governor is to motivate and facilitate productivity of the residents.

The Ado-Ekiti born politician also commended the Governor-elect for his ongoing consultation with Ekiti leaders and stakeholders, describing the move as not only strategic, but a confirmation of Oyebanji’s level-headedness and a leader with a remarkable listening ear.

Ojudu said: “Oyebanji has the capacity and the required experience to reposition our dear State. We will keep praying for him while we hope he makes a difference. Ekiti people are long-suffering. They need a change. We hope on him,”

To make a remarkable difference in office, Senator Ojudu urged Oyebanji to focus on the people by addressing their needs, pointing out that there is so much poverty in the land.

“There is a need to sincerely address poverty in our State. He will have to motivate the people to be productive and ensure the youths are gainfully employed. When I say gainfully employed, I do not mean government jobs, I mean as farmers, food processors, in ICT, in the trades, as artisans and builders. No community develops where most of the people are idle.”

On the significance of reaching out to stakeholders in Ekiti before taking over the mantle of leadership, Ojudu said the move was good and commendable.

He urged the Governor-elect to reach out to all stakeholders, pick their minds and be inclusive in his administration.

Earlier, Oyebanji had explained that his visit to Senator Ojudu, like other prominent Ekiti elite, was necessary considering his contribution to the State and national development in the area of journalism, activism and political development.