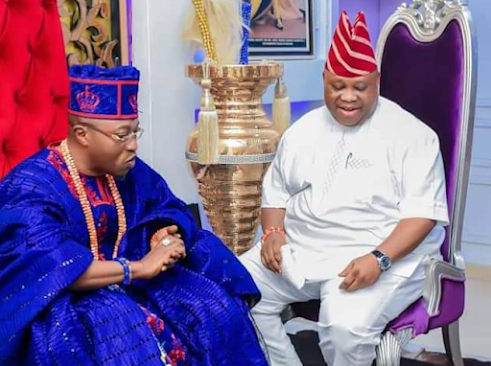 It appears the Oluwo of Iwo, Oba Abdulrosheed Adewale, has dumped the Governor of Osun State, Gboyega Oyetola, who lost his re-election bid in Saturday’s governorship poll.

This is as the Oba congratulated the governor-elect, Ademola Adeleke of the Peoples Democratic Party (PDP), asking people to cooperate with him.

Oluwo’s message to Adeleke came at a time Gov Oyetola was still contemplating going to the tribunal to challenge the outcome of the election that returned Adeleke as the winner.

Saga Gist recalls that the monarch had before the election promised, “I am confident of delivering 90,000 votes for Governor Oyetola.”

But, the outcome of the election was far below the Oba’s expectations as the ruling All Progressives Congress (APC) lost to the opposition PDP.

In a statement on Friday, Oluwo commended Adeleke for his “tenacity, courage and commitment” to his goal, praying for divine wisdom and understanding to effectively manage the state.

He enjoined every patriot of the state to cooperate with the governor-elect so that Osun would continue to be great in the face of global economic hardship.

The statement signed by his Press Secretary, Alli Ibraheem, and posted on his social media handle, called for collaborative efforts with technocrats, whose inputs, he said, would do the state a lot of good.

“I congratulate the Osun State Governor elect, Senator Ademola Adeleke on his victory at the keenly contested poll. He has demonstrated an uncommon courage, tenacity to have survived many hurdles. His life is a lesson for many aspiring youths. There is always reward for hardwork”

“I look forward to having an Iwo man as the Osun State Governor if God permits! I pray for divine wisdom, courage and understanding for Senator Ademola Adeleke to effectively manage Osun State affairs,” the statement read.