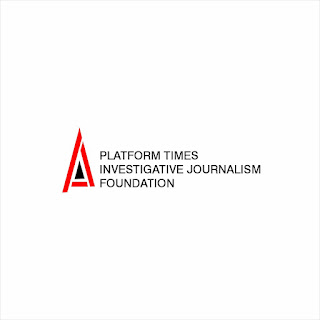 Spurred by an unflinching desire to strengthen developmental journalism and uphold public accountability, the Platform Times (online) newspaper has launched a foundation, PLATFORM TIMES INVESTIGATIVE JOURNALISM FOUNDATION, with a tall goal of training, mentoring, and assisting new generation journalists in making impacts.
PLATFORM TIMES hit the newsstand in 2013 as a community newspaper, but later restructured and elevated its status to an online newspaper with national coverage. Its website, www.platformtimes.com.ng reaches over one million readers daily with news reports, analysis, features, and investigative reports.
Occasionally, it also produced hardcopy magazines which were distributed free of charge to various stakeholders such as ministries, Local government secretariats, state house of assembly, palaces, political party secretariats, eateries, hotels, banks, super markets, schools, religious centres, and other private enterprises across the country.
Platform Times reporters had partnered with reputable organisations to expose corruption in government and hold public officers accountable. Some of the organisations that had offered our reporters such assistance include the African-China, the Centre for Journalism Innovation and Development, the Nigeria Health Watch, and the International Centre for Investigative Reporting, among others.
“We look forward to having more productive partnerships with them now that we have launched a foundation,” says the Acting Director, Sodiq Ojuroungbe .To advance its vision of advocating community development, exposing social ills and corruption, and upholding public accountability, the management launches The PLATFORM TIMES INVESTIGATIVE JOURNALISM FOUNDATION (PTIJF).The foundation will provide training for young journalists and breed a new crop of politically- aware, socially-conscious, and solution-seeking leaders bearing in mind that the young generation represents the future of journalism practice and democratic leadership.
The PLATFORM TIMES INVESTIGATIVE JOURNALISM FOUNDATION will focus its scope of operation on the following areas: Fact-checking and investigative reporting, climate and gender reporting, solution journalism and Free press advocacy. Its operations will be based on credible data gathering, and human interests, in line with best global practices. It will uphold the principles of democracy, including public accountability, social justice, equality, and freedom of expression.In providing training opportunities for young and budding journalists, our target is to train no fewer than 2,000 journalists across the country in our first year of establishment.
The training will cover Investigative and Data Journalism, Fact-Checking, Climate and Gender Reporting, and Solution Journalism.PLATFORM TIMES INVESTIGATIVE JOURNALISM FOUNDATION will also serve as an avenue for mentorship and training on leadership, contemporary journalism practice and democratic principles by equipping young folks with adequate knowledge of the numerous opportunities in journalism.
The foundation will help journalists in accessing financial support and also ensure the protection of journalists against injustice.While we will be launching a new website soon for the foundation, our office is located at 6th Floor, K-Plaza, 18, Lalubu Road, Oke-Ilewo Abeokuta, Ogun State, Nigeria.
You can reached us @ Info@ptijf.com.ng  or via our Facebook page: https://web.facebook.com/PTIJF
SIGNED:Sodiq Ojuroungbe
Acting Director
09155570590
Tags:
News