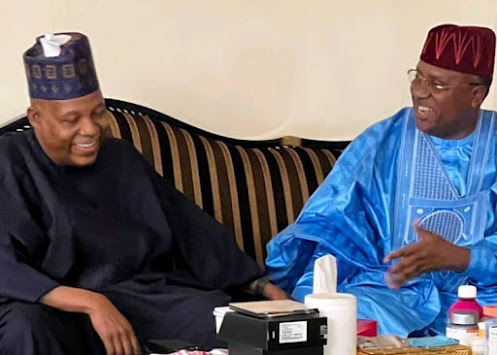 The Vice Presidential candidate of the All Progressives Congress (APC), Senator Kashim Shettima, has paid a visit to former Governor of Adamawa State, Senator Jibrilla Bindow.

Bindow, who was the Adamawa State Governor between 2015 and 2019, lost his return bid in 2019 due largely to conflict among some prominent members of the party, at least two of who were widely said to have discouraged votes for him.

He sought the party’s governorship ticket for the 2023 election but lost it reportedly because the two aspirants who polled more votes than him applied methods he did not subscribe to.

He was consequently rumoured to be planning to leave the APC, but Shettima, accompanied by some other notable members of the APC, went to Bindow’s house in Abuja Thursday and solicited his continued membership of the APC and support for the party in the 2023 general elections.

According to an Adamawa-based news medium run by a former aide to Bindow, Shetima urged the immediate past Adamawa Governor not to nurse plans of leaving the party because he has labored too much for it.

Shettima said he was aware Bindow has “gone through a lot of pains because of the party’s internal feuds” but that efforts were on to unite all APC members in Adamawa State.

“My brother, you have laboured so much for this party, I can’t watch you leaving us. We are together on the mission of winning the 2023 election,” Shettima told Bindow.