Benedict Elujoba: The Role of Manufacturing in Accelerating National Development 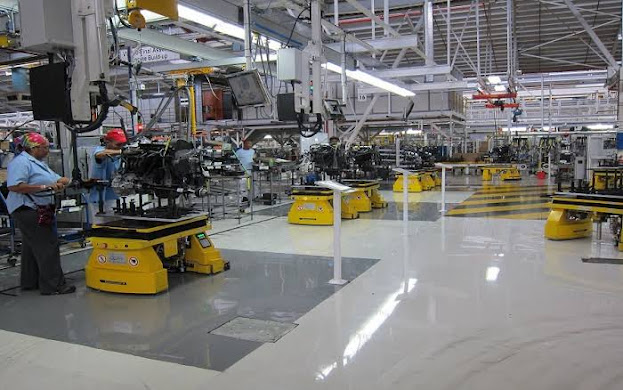 In development economics literature, manufacturing is often regarded as the engine of growth and development. The leading economies of the world: USA, China, Germany, Japan, UK etc grew into economic prominence chiefly on the back of industrial revolutions that were driven by advancements in manufacturing capabilities.

In most emerging economies, manufacturing remains critical to job creation, as well as inclusive and sustainable industrial development. Manufacturing currently accounts for over half a billion jobs worldwide and around 17 percent of the world’s workforce of about three billion.

It goes without saying that for Nigeria to achieve sustained and accelerated economic growth it cannot be an exception. It must improve her manufacturing capacities so as to move from a producer of predominantly primary products to a producer and exporter of finished goods. It is the value additions from manufacturing that will enable the country earn far more from the global markets while creating new employment and attracting foreign direct investment as well as increasing returns to the government through improved taxes and levies.

This is why, for about a decade, the focus of the federal government has been on economic diversification and reducing government’s dependence on crude oil as the major revenue or foreign exchange earner. The country’s performance though still leaves a lot to be desired.

Over the last five years, Nigeria’s top non oil exports have been dominated by raw materials. For instance, a Central Bank of Nigeria (CBN) monthly report in February 2021 revealed that in November 2020, Olam Nigeria Limited topped the list with a value of $26.65m from the export of cocoa beans, cashew nuts and sesame seeds to Turkey and China.

A notable manufacturer of finished goods that has remained consistently among the top five non-oil exporters over the last three years is British American Tobacco (Nigeria) Limited (BAT Nigeria) from the export of cigarettes to several West African countries. In the referenced monthly CBN report, BAT Nigeria had total exports of $12.57m.

This is made possible due to the Company’s $185m cumulative investment in a state-of-the-art factory in Ibadan which has created over 350,000 direct and indirect jobs for Nigerians. BAT Nigeria’s operations have also earned the country over $900m in taxes and other levies in 20 years, while repatriating over $100m in foreign exchange per annum and supporting additional foreign direct investments of USD30m by a principal supplier.

Data from the National Bureau of Statistics reveals that up until Q4 2021, Sesame seeds remained Nigeria’s major non-oil export, only recently toppled in Q1 2022 by Urea (which is a by-product of crude oil). These are indicators that show the urgency with which Nigeria must improve her manufacturing capacity. The list of top non-oil exporters must be increasingly populated by manufacturers of finished products in both volume and value.

The same applies for other raw material exports such as sesame seeds, cashew nuts, gum Arabic etc such that Nigeria will enjoy more FDI; increased foreign exchange repatriation; improved earnings from taxes and levies as well as job creation from many more companies as it currently does with BAT Nigeria.

The United Nations Industrial Development Organisation (UNIDO) 2022 Industrial Development Report recommends that in preparing for the future, countries around the world would need to “strengthen their manufacturing and digital capabilities and promote mutual learning and knowledge-sharing.” It notes specifically that“in developing economies, governments and business leaders must strive to foster the development of domestic production capabilities to ensure long-term resilience in a rapidly changing global industrial landscape.”

The Manufacturer’s Association of Nigeria (MAN) has remained in the forefront of efforts to foster an enabling environment for manufacturing and industrialization in the country, along with employers unions, private sector organisations and economic experts. They have continued to outline the problems that plague the manufacturing sector including unfavourable business environment; erratic power supply; poor and decaying physical infrastructure; multiple taxation; high interest rates; and inconsistency in government policies, while also proferring solutions.

At the recently concluded Nigeria Employers Summit 2022 in Abuja,the CEO, Centre for the Promotion of Private Enterprise (CPPE), Dr Muda Yusuf, identified spiraling inflation; exchange rate depreciation and volatility in forex market; the multiplicity of taxes and levies; and trade policy issues as some of the problems militating against investment and ease of doing businesses in the country.

“Manufacturers need to be supported by trade policies, considering that they import raw materials and machinery and the challenges that come with it. Inappropriate monetary and fiscal policies could make or unmake any investment in any economy. These policies are at the centre of an enabling environment for business. Hence, there is an imperative of reform in the entire international trade ecosystem and the general macroeconomic management system of the country,” he added.

Other speakers at the Summit also called for the introduction of sustainable regulatory frameworks that will secure current investment in the country and create additional investment opportunities that are beneficial to the nation’s economy.

In its 2021 second-half economic review contained in a May 26, 2022 report, the Manufacturers’ Association of Nigeria (MAN) noted that the foreign exchange crisis, which is responsible for the depreciation of the Naira value compared to convertible currencies such as the US dollar, diminishes the size of manufacturing and the incentives of manufacturers in the country as Naira value depreciation causes the costs of manufacturing raw materials and machinery imports to escalate. The corollary is that manufacturers find it hard to meet transactional obligations with overseas suppliers as required.

In response to theforex crisis, CBN recently announced the introduction of a non-oil export optimization framework as part of the Bank’s Race to $200 Billion in Foreign Exchange (FX) Repatriation (RTX 200) programme.

The RT200 programme is a set of plans, policies, and programmes designed to increase the nation’s earnings exclusively from non-oil exports to 200 billion dollars in FX repatriation within the next five years. The RT200 initiative is designed to be implemented through five anchors: Value Adding Exports Facility (VEF); Non-Oil Commodities Expansion Facility (NCEF); Non-Oil FX Rebate Scheme (NFRS); Dedicated Non-Oil Export Terminal; and the hosting of a Bi-annual Non-Oil Export Summit.

Nigeria also has to solve the power conundrum to reduce the reliance of manufacturing firms on diesel and other expensive alternative power sources as a result of an unreliable national power grid. Infrastructure development must also be accelerated (roads, rail, to improve access to products and markets).

It is hoped that the RT 200 and other interventions such as the Export Expansion Grant; Export Development Fund etc, will improve the ease of doing business and thereby engender an accelerated growth in output; value addition; and export capacity of Nigeria’s manufacturing sector.