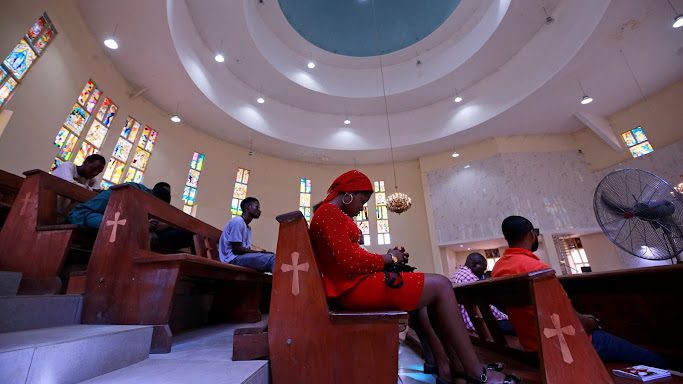 A catholic priest, Rev. Fr. Cyril Ogunsusi has said that the Christian community in Oye and Ilupeju Ekiti did not receive notification of attacks from any terrorist group.

This came following the rumour that some members of Boko Haram had marked the churches in the axis for attacks.

Ogunsusi gave the information during his homily on Sunday at the SS Peter and Paul Catholic Church, Oye-Ekiti, saying that the rumour was to create fear and panic among Christians in the two communities.

Ogunsusi, who commended the turn-out of Christians to church services, urged them to keep striving for the kingdom of God against all odds and tribulations.

He, however, called on every citizen to be security cautious and report all suspicious movements to the appropriate authority.

Also, at the Sacred Cherubim and Seraphim, Oke Isegun Headquarters, Irare Estate, Oye-Ekiti, the Pastor of the church, Superintendent Apostle Olalekan Agboola and Reverend Apostolic Mother, Grace Bada focused on giving thanks to God in all situations.

The duo said God’s blessing is for all who serve Him in holiness and truth, while encouraging Christians to continue in the journey of the kingdom of God.

There were prayers for peace in Ekiti State and Nigeria in the churches visited.

Saga Gist reports that there were adequate security personnel in and around the churches.