Funmi Branco: Ogun politics, Amosun and the abuse of power 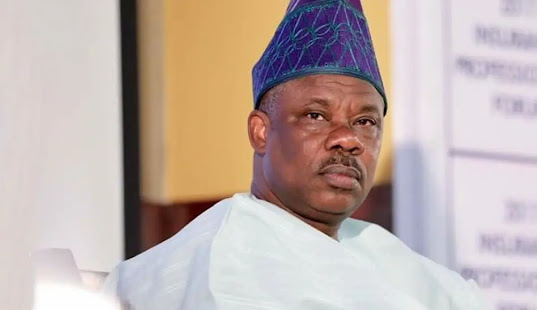 You do not have to be a literary mind to realize that power is a special kind of wine. It intoxicates and must be tempered by trials, tests and the keeping of focus. Raw power unmediated by checks and balances disrobes otherwise sane individuals from the commonality of human kindness. In the corridors of power many, forgetting that they are humans whose breath is completely at the mercy of their Creator, behave like the lords of time and circumstances. They look down on others as if they are of no consequence. As the Bard of Avon says through Brutus in Julius Caesar: “The abuse of greatness is when it disjoins remorse from power.”

If you have a friend who has not attained any position of power, that friend isn’t really your friend because you may not know his character. Most people hide their inner character and behavioral patterns while still searching for power. But as soon as they get that power, they become their real self. As John Dalberg-Acton, the 19th century English historian once famously said, “power tends to corrupt but absolute power corrupts absolutely’. Actually, the Bard of Avon provides a neat summation of the various categories of people who traverse the corridors of power: “Some are born great, some achieve greatness while some have greatness thrust upon them.”

The pages of history are replete with people who were never expected to be in the corridors of power and who mismanaged it so blatantly and invidiously, egged on by fawning felons. In our political environment, power and its mismanagement is a common phenomena, and it is in this regard that the macabre dance going on in the Gateway State invites commentary. Created in 1976, the state has seen seasons of power and its wielder. In 1999, there was Governor Olusegun Osoba who was only privileged to spend only a term, but whose legacy still remains till today. There was Governor Gbenga Daniel, a brilliant but brash leader who spent two terms and thereafter contended with the side effects of the arrogance of power: his successor made sure that he was a regular visitor in EFCC office and some of his properties were even confiscated. Humbled and chastised, he is now trying to get his acts together.

And then there was Ibikunle Amosun, the focus of this piece. He came in peaceably but soon became a warlord, taking the battle to his predecessors and hounding them out of the Ogun political space and even geography: Osoba and Daniel could not move about freely in the state. Towards the end of his term, unable to install a successor through the APC platform on which he was elected, Amosun spurned the authentic primary which brought in Dapo Abiodun and took his structure to the Allied Progressive Movement (APM), fighting against his party. After his government wound down, there were allegations of atrocities, including accumulation of arms and financial recklessness (uncompleted projects fully paid for, etc) but the Ogun Central senator has not been given the kind of treatment he meted out to his predecessors, apparently because of the gentlemanly character of his successor, against whom he (Amosun) has not stopped launching a media war.

The brain behind the negative publicity against his successor, Amosun was accused of coming to Abeokuta, the state capital, inspecting projects as if he was still in government. Abiodun ignored all the shenanigans, including the media war on issues already rested at the Supreme Court. When that would not work, the fake news changed character: the governor was portrayed as an ex-convict, with forged documents to back up the lie.

Instead of seeking rapprochement for him to get a return ticket to the Senate, the ex-governor announced to all and sundry that he would be Nigeria’s next president. Facing certain defeat, he stepped aside from the charade at the last minute. While he was away at the market of presidential buffoonery, the Ogun senatorial primaries were held and candidates emerged. And fully aware of the provisions of the Electoral Act prohibiting participation in two different primaries, the man who claims to be Ogun’s political leader turned full attention to his nemesis. Recently, while receiving an award in Abeokuta, the state capital, that the 2019 governorship election in Ogun State that brought in Governor Dapo Abiodun as the fifth democratically elected governor of the state was rigged in his (Abiodun’s) favour and that the riggers had apologised to him (Amosun).

But that gaffe, if gaffe it really was, has now landed him in legal quagmire, for by his own admission, he had been hobnobbing with election riggers. Civil society predictably rose in dissent, with one, the Centre for Good Governance (CGG), asking the authorities of the Nigeria Police Force (NPF) to invite him for questioning. The arguments were unimpeachable: Amosun made his explosive claims knowing full well that election rigging is a felony, and that the quest for the validation of the election he rubbished went as far as the Supreme Court, which declared that the incumbent governor won fair and square. Besides, local and international observers that monitored the election said that it conformed to laid-down rules and reflected the choice of voters, meaning that the Ogun Central senator must tell Nigerians the facts in his possession which INEC, the apex court and local and international observers did not have.

In any case, Abiodun did not have all the paraphernalia of government to swing votes in his favour, relying only on the goodwill of the people of Ogun State. Thus, by claiming that the 2019 governorship election in Ogun State was rigged, Amosun not only cast aspersions on the integrity of the Independent National Electoral Commission (INEC), he also cast aspersions on the integrity of the Supreme Court, and the police and other security agencies who were visibly on ground on the day of the election. The senators has to explain why he refused to report a felony brought to his knowledge, even with the police and DSS at his beck and call.

The spectre of an ex-governor holding political crusades against his successor, making incendiary remarks targeted at stoking crisis and undermining the peace and stability of the land is definitely an ugly one. It amounts to arrogance of power for Amosun to claim that he would remove his successor, whom he did not install in the first place, from office. Arrogating the powers of the Ogun electorate to yourself simply because you once led them is sheer buffoonery. How can a senator who could not even secure his own re-election boast of uninstalling a governor when he could not even install a successor? Power corrupts, but it’s sheer comedy when you claim powers you do not even have.

Branco contributes this piece through funmibranco@naver.com