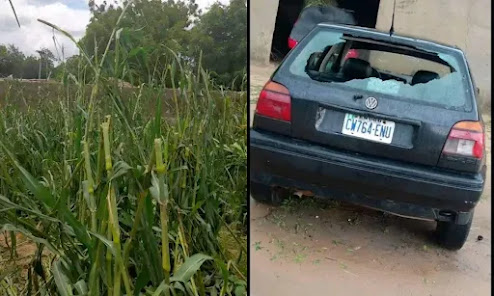 Hail has destroyed houses and farmlands after a heavy downpour in the Babura Local Government Area of Jigawa State.

A resident narrated that the incident occurred on Friday evening at Masko village.

He explained that most of the residents of the area lost their farm produce and houses and are now taking shelter in public buildings.

He said over 1,500 farmlands and 700 houses were destroyed by the flood and ice balls in over twelve communities.

Lawan however urged the state and national emergency management agencies and relevant stakeholders to come to the aid of the victims.

The Emir of Ringim, Alhaji Sayyadi Abubakar Mahmud, had also sympathized with the victims and prayed against future occurrences.