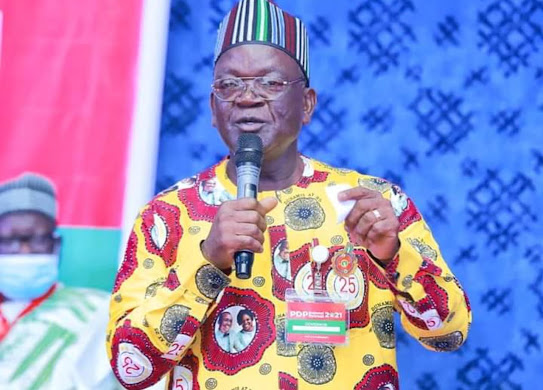 Governor Samuel Ortom of Benue State has debunked a report alleging that he is pushing for the removal of the National Chairman of the Peoples Democratic Party, PDP, Senator Iyorchia Ayu.

A group ‘Tiv Youth Council’ had in a statement on Monday alleged that the governor, alongside other PDP leaders, is plotting to unseat the Ayu following the crisis rocking the main opposition party.

Reacting to the report, Ortom in a statement issued by his Special Adviser, Media, and Publicity, Terver Akase alleged that the state’s chapter of the ruling All Progressives Congress, APC, was responsible for the allegation.

According to the statement, Tiv Youth Council’ which issued the release, does not exist, alleging that they were hired by the APC to play the role of attack dog.

Akase said Governor Samuel Ortom has no problem with the PDP National Chairman, Senator Ayu, stressing that the party is already working to resolve the issues of concern within its fold and won’t be needing the input of APC.

The statement reads, “The APC youth group in question insults people for a living. Theirs is a perfidious political enterprise that thrives on blackmail, mischief, and the stirring of acrimony for survival.

“APC which is engulfed in a series of crises in Benue State ranging from its fraudulent nomination of a governorship candidate to the impasse of a running mate lacks the moral high ground to comment on the affairs of PDP.

“Their attempt to portray Governor Ortom as one who fights other illustrious Benue sons is such a lame-duck and nauseating reasoning. The Governor as an effective team player has supported and is still supporting many Benue people to grow and occupy high positions in society.

“He believes in human capital development and redefining Benue State’s place in the national politics of our country.

“We expect APC to face their mountain of internal wranglings which have led to their failure to field a governorship candidate for the 2023 elections in Benue State.

“APC ought to be worried more about the fact that their party is in disarray in Benue State as can be seen in the mass defection of their members into PDP, including serving members of the State House of Assembly.

“Governor Ortom is not responsible for the collapse of APC in Benue State. He was not the one who advised the leader of APC in the state, Senator George Akume to take the party as his personal property.

“Under the leadership of Governor Ortom, PDP conducted transparent and credible primaries. With 35 Governorship and many other aspirants for National and State Assemblies seats, the Governor effectively coordinated the party and it has remained strong and united, without any form of litigation.

“As we earlier stated, the opposition party in the state is out to divert attention from the myriad of problems facing it with numerous court cases trailing their controversial nomination process.

“Launching media attacks on Governor Ortom has become an obsession of sorts for the APC.

“We urge members of the public to regard the utterances of the group as empty rantings only aimed at securing their next meal ticket”.