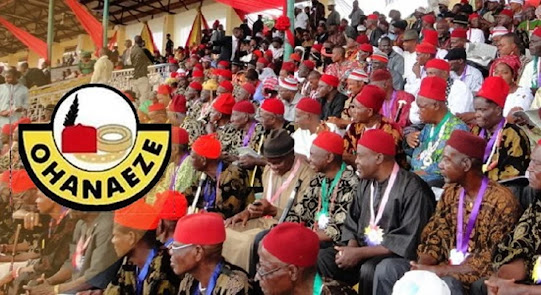 The United Kingdom chapter of Ohanaeze Ndigbo has distanced itself from the recent comment by its chieftain, Prof. Joe Ukamenem, regarding Nnamdi Kanu, leader of the Indigenous People of Biafra, IPOB.

Ukemenam had claimed that Kanu’s house in the UK was worth £10 million.

He was quoted in an interview with Sun Newspapers as saying that Kanu had no traceable business, adding that there is no evidence of tax returns or national insurance contributions on the part of the IPOB leader.

But, Uche Osuigwe, the Secretary-General Ohanaeze in the UK, said the body played no role in the interview.

Osuigwe disclosed this in a letter to Kanu’s Special Counsel, Aloy Ejimakor.

“But even as Ohanaeze Ndigbo UK played no role whatsoever in such an interview, we have taken it upon ourselves to disclaim it and extend our sincerest apologies to whosoever the interview offends.

“Please extend our warm greetings to Mazi Nnamdi Kanu (OHAMADIKE NDIGBO) and assure him of our abiding respects and high regards for his person. Please accept the assurance of our highest esteem.”

Meanwhile, the UK chapter of Ohanaeze has suspended Ukemenam following the allegation.

Ohanaeze said Ukemenam’s suspension would give way for an investigation.

Ukemenam was suspended during an extra-ordinary meeting emergency meeting yesterday.

The statement reads: “Immediate suspension pending the outcome of the investigation of serious misconduct

“I am writing to inform you that the Executive Council of Ohanaeze Ndigbo UK held an extraordinary emergency meeting on 21st August 2022.

“The meeting was to discuss the alleged interview you granted to Sun news online, which was published on the 20th of August 2022.

“In the meantime, the Deputy President will continue to act in the capacity of the President pending the conclusion of deliberations on this matter.”