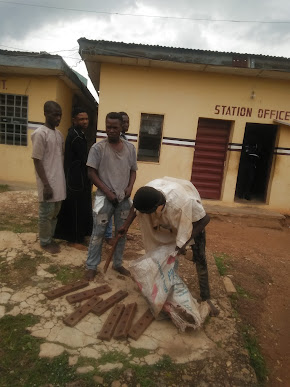 Parading the suspects at the NSCDC’s headquarters in Ilorin on Tuesday, the spokesperson, Ayeni Olasunkanmi, disclosed that the railway line vandals were arrested on Friday by operatives of the command.

He said the vandals, Waheed Ganiyu (22) and Majeeb Afolabi (24), both residents of Ganmo area near Ilorin metropolis, were arrested while vandalizing railway line along Ogbondoroko area in Asa Local Government Area of the state.

The three other suspects arrested for alleged housebreaking are Shehu Nurudeen who reportedly burgled a house along Wara-Lubcon area of Ilorin, the state capital.

According to the spokesperson, Shehu burgled the house and sold the stolen items which included laptops, wristwatches and phones among other valuables to two receivers, namely, Abdulwahab Mustapha and Isiah.

All the suspects confessed to the crimes in an interview with journalists at the NSCDC headquarters.

Ayeni, who said the suspects will be taken to court for prosecution, lamented that “it is disheartening and worrisome that Nigeria’s energetic youths who should rather be contributing meaningfully to make the country great are now behind these criminal acts.

“We all have serious work to do as parents, guardians, security and other civilians if we want Nigeria to be at peace by giving security agencies timely and adequate information,” he added.

Ayeni said the security of critical national assets is under the purview of the NSCDC and “we are doing our best to secure them.”