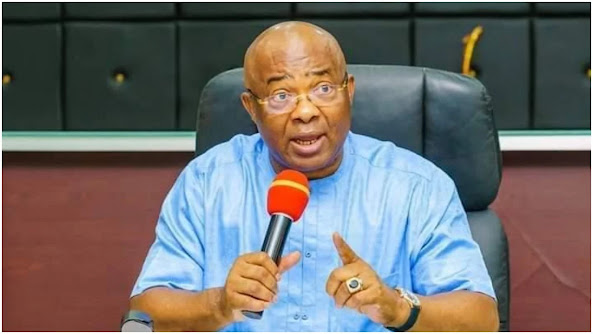 The Peoples Democratic Party, PDP in Imo State on Friday said the regime of Gov Hope Uzodinma has approached its expiry date and must give way to a PDP led-administration.

The opposition party alleged that the Imo State government through its sponsored protest is trying to hoodwink the people and divert attention from the woes and infamies of the wobbling regime.

In a statement signed by the Director-General, Imo PDP New Media, Collins Opurozor in Owerri, the PDP said as long as God is still on the throne, Imo people will overcome Uzodinma.

The Party alleged that Imo State under Gov Uzodinma has continued to occupy the top positions in all indices of social malady, ranging from worsening ease of doing business to debilitating rural poverty and to the deteriorating rate of unemployment, which has ‘today risen to 83%’.

Recall that the Coalition For Justice, Peace And True Democracy, a socio-political pressure group, had called for the investigation of former Imo Governor, Emeka Ihedioha and three others over alleged sedition.

The group, during the protest in Owerri, the Imo capital, on Thursday, called for the investigation of former Imo Deputy Governor, Mr Gerald Irona.

They further called for the investigation of a former member of the House of Representatives, Mr Uche Onyeaguocha and his incumbent counterpart, Mr Kingsley Uju, who represents Ohaji-Egbema, /Oru West/ Oguta federal constituency.

The party while reacting to a protest held in Owerri described the exercise as s sponsored protest against PDP leaders.

PDP said, “It is mind-boggling that, after unleashing mass misery in Imo, this regime, just yesterday, deployed state resources, state authority, state appointees and other instruments of state power to stage a protest and blame key opposition leaders for the festering insecurity in the state.

“The PDP considers it deeply troubling that, instead of coming out clean over its role in the gruesome murder of no fewer than fourteen young men who had recently attended a traditional marriage ceremony at Awo-Omamma, this regime has unfortunately remained unrepentant and unapologetic, and has resorted to the most bizarre contrivances to eventually set the State ablaze.

“This a harrowing experience for Imo people to live under a regime which militia force known as Ebubeagu has been widely implicated in mass murders, armed robberies, arson and abductions.

“Curiously, Gov Uzodinma, till this moment, is yet to refute a very weighty allegation by the Senator representing his own senatorial district, who had accused him of creating and operating a deadly hit squad.

“The opposition party while encouraging the people of Imo State to keep the spirit alive, and discountenance this very last kick of a dying horse, being aware that this regime has approached its expiry date and must give way for a PDP led-administration for the good of the people.”