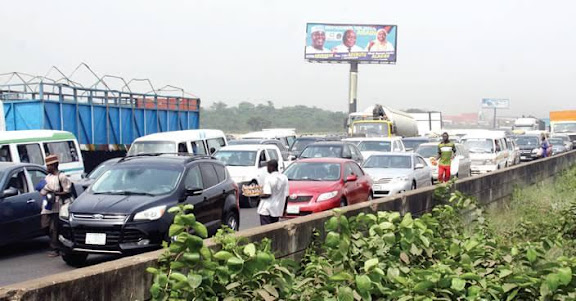 Following the reports of robbery on the Lagos-Ibadan expressway, the Ogun State police command has warned traders and hawkers to steer clear of the long bridge.

Saga Gist reported Wednesday that some armed men dispossessed road users of their belongings at gunpoint.

This happened amidst rumour that 20 persons were kidnapped by bandits at the Kara end of the road, a claim the police described as untrue.

A statement by the Ogun State police spokesman, Abimbola Oyeyemi said that some of the hoodlums do pretend to be hawking goods on the bridge during traffic gridlock, using the opportunity to rob.

To stop the attack on commuters and residents, the command directed traders hawking on the bridge to quit with immediate effect, Oyeyemi said.

According to him, the ongoing road construction at the Kara end of the long bridge gave the hoodlums an avenue to attack unsuspecting members of the public.

In view of this, Oyeyemi hinted that the Commissioner of Police, Lanre Bankole, deployed his tactical teams to the area so as to compliment the efforts of the divisional policemen in surveying the area.

“To this end, the Command is hereby using this medium to warn all those hawking goods on the bridge to quit with immediate effect in order to sanitize the environment and deter the criminals from perpetrating crime on that bridge and anywhere around,” Oyeyemi stated.

He quoted the Commissioner as assuring commuters of their safety, adding that “the command will do everything within the ambit of the law to flush out the hoodlums in the area.”