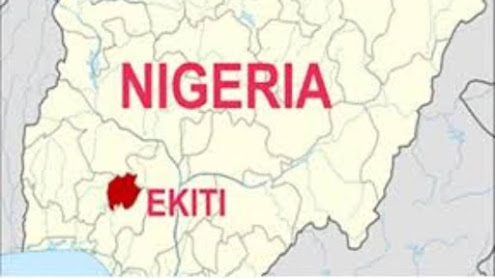 Aggrieved farmers on Thursday took to the major road leading to the Cargo Airport being constructed on the outskirts of Ado Ekiti to protest the failure of the government to compensate them for their lands and farm produce destroyed in the course of building the airstrips.

The farmers, numbering about 100, used iron bars and big sticks to barricade the road and made bonfires to show their grievances.

The visibly angry farmers accused the government of shortchanging them and depriving them of their rights and entitlements.

The protest is one out of many held by the farmers over the same issue.

As early as 6:00 am, the protesters in their numbers blocked the Ago Aduloju road leading to the airport and later the major road linking Ado and Ikare Akoko of Ondo State.

One of the Chinese contractors who came in the company of soldiers guarding the airport tried his best to calm the farmers, but his efforts proved abortive.

The Hon. Commissioner for Information Barrister. Akin Omole, who was contacted through a phone call, said he would get across to the appropriate bodies in charge of the project who will see to the grievances of the protesting farmers.