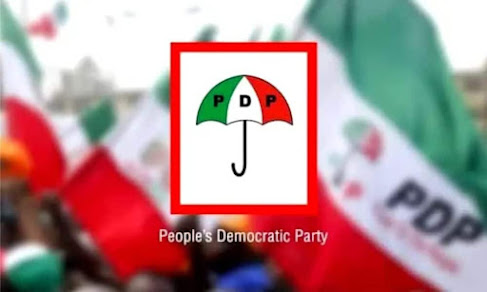 Oyo State chapter of the Peoples Democratic Party (PDP) has said that it is in support of the call for the resignation of the National Chairman of the party, Senator Iyorcha Ayu.

Saga Gist recalls that some leaders of the party, including Governor Nyesom Wike of Rivers State and his counterpart, Seyi Makinde of Oyo State have been clamouring for the resignation of the national chairman.

The Oyo State chapter of the PDP has now said that it is in full support of the two governors.

The party noted that it was on record that Ayu enjoyed the full support of Wike, Makinde and other national leaders to emerge as the party’s National Chairman.

The party made these disclosures via a statement signed by its Publicity Secretary, Engineer Akeem Olatunji.

Olatunji, in a statement on Saturday, insisted that the demand for Ayu’s resignation was in tandem with the party’s ideology.

He maintained that the PDP in Osun, Ogun, Ondo and Ekiti must focus their energy on how to win elections in their States rather than focusing on issues that can cause disunity in the party.

He said, “The demand for the resignation of Ayu was in tandem with everything the party seeks to translate into governance when its presidential candidate, Alhaji Atiku Abubakar eventually wins the 2023 election stressing that Governors Makinde, Wike, and other national leaders on the course should be celebrated as heroes of a new national rebirth in the life of PDP.

“PDP in Osun, Ogun, Ondo and Ekiti especially, must focus their energy and might on stamping their feet on the ground and be ready to fully secure their states for PDP come 2023 instead dissipating energies on a course that’s already being handled and managed by our national leaders and avoid being used by few who may be working for personal gains moreso, that political campaign lurks around the corner with campaign funds ready for disbursement.

“It was on record that the national chairman enjoyed the full support of Governors Wike, Makinde and other national leaders to emerge the party’s National Chairman on the strength of his (Ayu’s) promise to step aside for a caretaker chairman from the south in the event the party’s presidential candidate emerges from the north”.