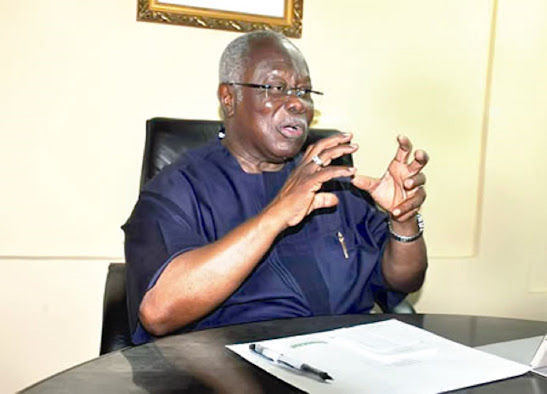 A prominent member and chieftain of the Peoples Democratic Party, PDP, Bode George, has suggested that he would remain in the party even if the National Chairman of the party, Senator Iyorcha Ayu, refuses to resign.

George disclosed this while fielding questions on Arise TV’s Morning Show on Friday.

According to him, he remains an irredentist member of the PDP, adding that what is good for the goose is also good for the gander.

PDP has been witnessing a crisis since the emergence of Atiku Abubakar as its 2023 presidential candidate.

The party erupted into crisis when Atiku chose Governor Ifeanyi Okowa of Delta State as his running mate for the 2023 election.

Governor Nyesom Wike of Rivers State has been aggrieved with PDP’s leadership over Atiku’s choice of a running mate.

Atiku ignored Wike, who came second during the PDP’s presidential primaries a few months ago, a situation tearing the party apart.

Following his action, Wike called for the resignation of Ayu.

Wike noted that the North could not produce PDP’s presidential candidate and the National Chairman.

Asked what he would do if Ayu refused to resign, Bode said, “People amazed me, what is personal about this when we met in Abuja on the re-visitation of the zoning committee, there was no Wike at that time because Wike saw sense in what we are saying they are now dividing the line this is not a good management style, it doesn’t help anybody.

“I am an irredentist member of this party, but what is good for the goose is also good for the gander. I have only one vote. I am saying this because someday, even if we win the election, we will remember that yes there was that voice and it is not a lonely voice. This is not a party issue now. We are talking about how to convince members of the electorate that they are more in number. We want to prove to them that we are responsible, we are respectable, we will be just and fair in the management in this massive country called Nigeria, and that is all.

“If we win, fine, at my age, what am I looking for? You are making it look as if it is a survival instinct, 78, what is it that I want? If I can’t tell the truth now, then when will I say it?

“I don’t know how people suddenly came up, it is because you are supporting Wike. Wike has the same point, he has not told the party that he is going to leave because they manipulated him out in the election. That is gone, we are looking forward. What do we tell Nigerians that if you are still manipulating the mindsets of the people is creating a lot of injury for our party, and those who have just come into the party they may not have any idea what the custom is, what the norm is?

“I remember at the NEC meeting a report of the zoning committee, the re-visitation committee was simply that ok we agreed because nobody announced this zoning at that time for the elective offices. We allowed everybody from every zone to contest for now.