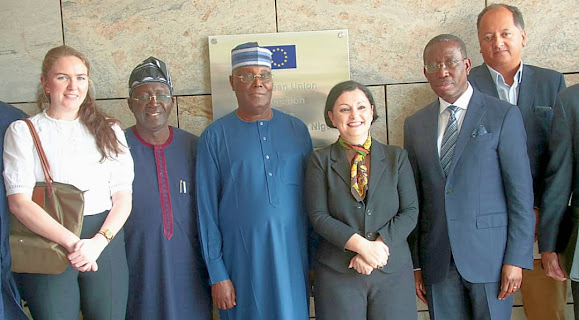 The 2023 presidential candidate of the Peoples Democratic Party (PDP), Atiku Abubakar, has reaffirmed his commitment to restore Nigeria’s leadership role in regional security and development.

Atiku, former vice president, according to a statement by his media office, gave the assurance on Thursday when he and his delegation that included the Governor of Delta State and the PDP vice presidential candidate, Dr Ifeanyi Okowa and PDP National Chairman, Dr Iyorchia Ayu met with the 19 Ambassadors of the European countries and the Ambassador of the EU Mission in Nigeria in Abuja.

The former Vice President berated the All Progressives Congress (APC) for its anti-people policies.

Atiku said the locking up of the borders eroded the gains of the foreign policy that was pursued by the previous PDP administrations.

He pledged that under his watch, regional security and collaboration will be strengthened.

The statement partly read “Atiku told the diplomats that his cardinal foreign policy is a cordial relationship with all countries and blocs with West Africa and Africa being the centre of his foreign policy.

“He said that the crisis points in the sub region cannot be addressed in isolation, are similar and largely fuelled by lack of development and will require him working with all the countries to bring peace back to the region.

“He recalled the enviable role that Nigeria played during the Obasanjo and preceding administrations that saw the country providing support and leading the initiatives to restore peace and stability in the region.

“The Waziri Adamawa desires that Nigeria and EU develop strong partnership in strengthening democracy and mutual benefit of both economies.

“He used the opportunity of the meeting to share his vision of a greater Nigeria and gave the diplomats an insight into his socio-economic and political agenda for Nigeria”.