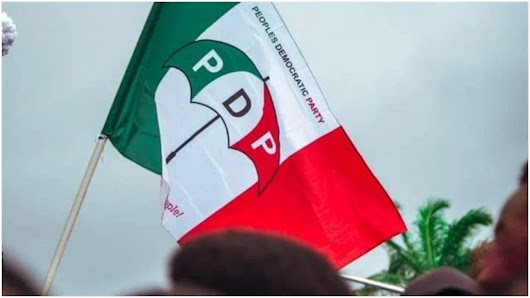 The Peoples Democratic Party (PDP) in Imo State has demanded for the immediate arrest and prosecution of the All Progressives Congress, APC, senatorial candidate for Imo East, Mr. Alex Mbata.

The party said this is to ascertain his role in the alleged non-execution of the projects funded under his watch as Pro-Chancellor of the Imo State University, Owerri.

PDP, while alleging that APC candidate was indicted by White Paper on Imo State University, IMSU, said it’s alarmed at the desperate attempts by the APC Senatorial Candidate for Imo East, Mr. Alex Mbata, to distort records and bend history in order to hide his questionable past.

The opposition party stated this in a release signed by Collins Opurozor, Publicity Secretary of Imo State PDP in Owerri,Imo State.

The party said those who should be brought to book over their alleged filthy roles in the collapse of that citadel of learning have now been decorated with APC tickets by Uzodinma, and they are now fouling up the media spaces to hoodwink the masses.

“As far as Imo PDP is concerned, what Uzodinma intends to achieve through the morbid and sinful senatorial ticket, which he single-handedly handed over to Mr. Mbata, is to institutionalize corruption in Imo State, while reducing the Nigerian Senate to a sanctuary of fraudsters.

“It is pertinent to remind Imo people that, in keeping with the vision of the PDP to build an educational robust Imo State, one of the earliest observations which our rebuild Imo Administration made upon assumption of office was the pedagogical and infrastructural inadequacies of Imo State University, Owerri.

“In view of that, the PDP Government set up a Visitation Panel to expose the issues that had hampered that institution. Mr. Mbata was Pro Chancellor and Chairman of Governing Council of IMSU and was appointed by the APC regime in 2014. The Visitation Panel, which was headed by Venerable (Prof.) Chinedu Nebo, investigated the issues between 2012 and 2019.

“Imo PDP therefore demands immediate arrest and prosecution of Mr. Mbata so as to ascertain his role in the non-execution of the projects funded under his watch as Pro-Chancellor and which consultant he was indicted to have unduly replaced.

“For Imo PDP, this matter touches on the very moral fibre of our society, and it is an issue which imperils the future of Imo children who today at IMSU are subjected to the most miserable conditions because of the dearth of basic health and educational infrastructure. ”

In his reaction, the Imo East Senatorial candidate said he was never indicted by White Paper on Imo State University, IMSU, accusing the opposition and a failed APC Owerri zone senatorial aspirant of sponsoring falsehoods on his person in the media.

Mbata, in a statement signed by his Media Adviser, Innocent Onyeukwu, stated that he was never indicted by the IMSU Whitepaper report, insisting that the Visitation Panel to IMSU, never confronted him with any petitions, allegations or questions when he was invited in March 2020, to give account of his stewardship when he was pro-Chancellor of the University.

According to Mbata,”IMSU White Paper is a public document, the general public and the media should study the report and not rely on the false narratives spewed by a particular media house.”