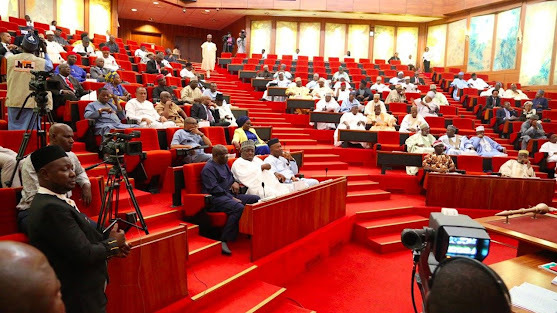 Following the ongoing renovation of the National Assembly complex at the sum of N30 billion, the Senate has begun to conduct its plenary from the ‘makeshift’ Chamber of the new wing.

The Senators returned from a two-month annual recess having gone on break on July 27, 2022.

Following their resumption, the lawmakers went into a closed-door meeting for three hours before the commencement of proceedings with the Senate President, Dr Ahmad Ibrahim Lawan presiding.

It was learnt that the ongoing renovation would last till December 22, 2022, and sittings will continue in the makeshift chamber.

For want of space at the ‘makeshift’ space, only a few journalists were allowed in to cover proceedings. This is even as the technical unit of the Chamber was unable to transmit the plenary, live.

Amid grumbling by representatives of media houses covering the Senate beat, the Special Adviser to the Senate President on Media and Publicity, Mr Ola Awoniyi assured journalists that the issues would be addressed before the week runs out for the live transmission of the Senate session.

Saga Gist, however, reports that only 43 Senators out of 109 members of the red chamber resumed on the first day.