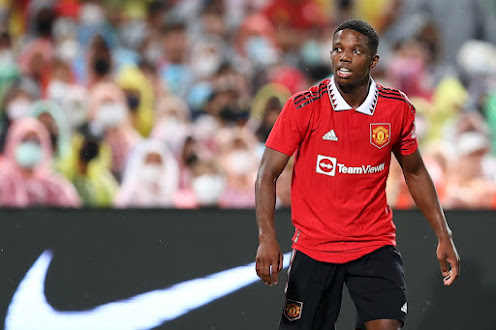 Manchester United left-back, Tyrell Malacia has insisted that he is not comfortable taking up a new role in the Dutch national side.

This was after Netherlands boss, Louis van Gaal tried him at centre-back during their 1-0 win over Belgium on Sunday.

The Man United man who came on in place of Nathan Ake was expected to operate at left-wing-back.

Daley Blind was expected to move to the centre of defence, but instead, Malacia was told to operate on the left side of a back three alongside Virgil van Dijk and Jurrien Timber.

Although he was unfamiliar with the new role, Malacia performed admirably. However, he did make one too many marauding forward runs for Van Gaal’s liking.

“I went two or three times too much forward,” he told De Telegraaf.

“That is not possible in this position as quickly. But I was corrected by others.

“I didn’t agree with it at the time, yes. That’s right. After the game, we talked about that moment for a while and then it was over.

“I’m comfortable with United at the moment. The national coach thinks that I should also be able to play in the centre of the defence. But I feel best on the left.”