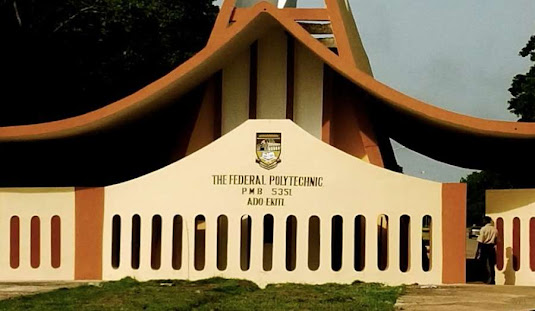 The leadership and members of the Academic Staff Union of Polytechnic, Federal Polytechnic Ado-Ekiti chapter, has taken to the street to express their displeasure over what they described as illegal detention of their members by the Economic Financial Crimes Commission (EFCC) and the Independent Corrupt Practices Commission (ICPC).

Trouble started when some members of ASUP were invited to the office of the anti-graft agencies in Ilorin and Akure in Ondo State following a petition received from some persons over some transactions in the institution.

The EFCC through the office of the Rector invited the affected lecturers who traveled to Ilorin only to get detained and quizzed over an alert they received from the institution some months back.

The union said the allegations levelled against their members were unfounded, baseless and that they knew nothing about the matter.

Speaking with journalists during the protest in Ado-Ekiti, the Chairman of Academic Staff Union of Polytechnic, Federal Polytechnic, Ado-Ekiti chapter, Dr Emmanuel Obafemi Abunbi expressed worry over the situation and called on the management to intervene.

“When they came back, we discovered that they were actually arrested because they had to provide surety, and were unjustly detained and profiled as an offender which was unacceptable.

“The money was paid as promotion arrears which was deserved, but were told to refund because they were not yet due which they did accordingly, to a designated account that the management provided.

“They did not apply and since it was refunded and now for EFCC to call it criminal, is way too far.

“We agreed that part of the key functions of the EFCC are to investigate all financial crimes, including advance fee fraud, money laundering, counterfeiting, illegal charge transfers, but we are not satisfied with this particular action hence the protest to show our grievances.”

The ASUP chairman said he wants the EFCC to know its members were law abiding citizens and will support any fraud detection but it does not include subjecting members to inhuman treatment that they do not deserve.

“We want the management to reach out to EFCC to clarify that we know nothing about these transactions and the money is no longer in our custody,” he concluded.

Narrating his ordeal in the hands of the anti-graft agencies, one of the lecturers, Mr Samuel Abereola, the Head of Marketing Department, Federal Poly Ado-Ekiti said he was punished unjustly.

Reacting to the allegations, the Director of Protocols, Information and Public Relations of Federal Polytechnic, Ado-Ekiti, Prince Adeyemi Adejolu, claimed that the petitioners were unknown to the school management.

According to him, “It’s true that some faceless people styled as concerned old students of this institution wrote a petition to the security agencies, especially the anti-graft agencies, that’s EFCC and ICPC which received the petition.

“They were calling for an investigation of what is happening in the institution, so the EFCC wrote requesting for documents and since it is still under the law, we obliged them the list of transactions and at the end of the day, some staff were invited.

“They are alleging that some staff were colluding with the management to serve as conduit pipes to siphon the resources of the institution.”

Adejolu maintained that the Rector held a meeting with all staff regarding the matter and as such lecturers are not the only ones being investigated.”