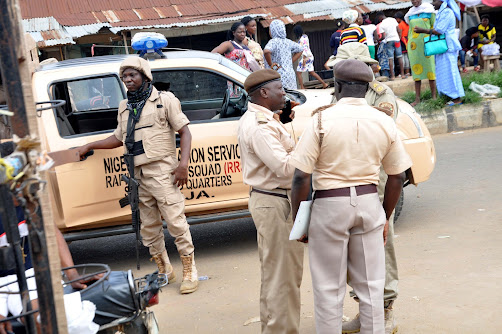 Saga Gist gathered that the exercise, led by Comptroller Sunday James, wrapped up a five-day special operation tagged “Saukan Shaho” in the state to achieve the result.

According to the NIS, the special operation Saukan Shaho meaning the ‘Eagle has landed‘, which was sanctioned by the Comptroller-General, Isah Jere Idris, and supported by the State Governor, Senator Douye Diri, led to the arrest of 44 Nigeriens, 35 Togolese, 20 Beninese and 6 Ghanaians, and many others screened and awaiting their country of origin.

The NIS Comptroller of the Bayelsa Command, Sunday James, while briefing newsmen in his office in Yenagoa, declared that the operations followed the laid down acceptable ECOWAS protocol and United Nations rules of engagement and respect for human rights.

He also mentioned that the other illegal immigrants had been guaranteed by their home countries of quick documentation, adding that the database of the NIS is more robust from the operation.

He said the command embarked on the operation between the 9th and the 19th of September, 2022, and raided major areas identified by the intelligence unit, including the Ariettalin, Swali, Onopa, Azikoro, Okaka, Bayelsa Palm, Ogbogoro, Obele, Otiotio, Famgbe and areas where we have the Bureau d’change.

He also expressed concern over the movement of other illegal migrants escaping to neighboring states of Delta, Rivers, and Edo State and called for similar operations in those states to fish out those that escaped being screened in Bayelsa.