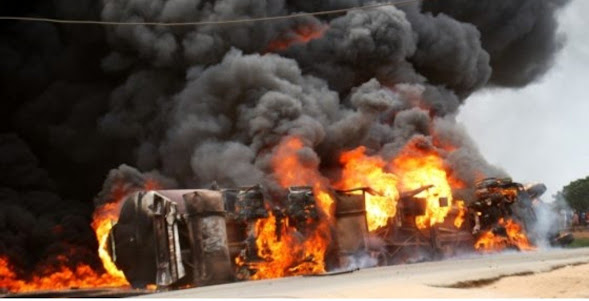 No fewer than 10 persons were on Thursday burnt to death when a tanker exploded along the Lagos-Ibadan expressway.

It was learnt that the incident occurred at about 2:13 am around Conoil, before Sagam interchange, Ogun State.

The Federal Road Safety Corps (FRSC) spokesperson in Ogun, Florence Okpe, said: “A total of 10 persons were involved. They were all burnt beyond recognition.”

According to Okpe, five vehicles were gutted by the inferno, a Mack truck registered as AKL198ZT; an Iveco truck with no registration number; a Mazda bus marked FFE361XB; an unregistered Howo truck, and the Mack tanker.

Okpe blamed the explosion on speeding, which she said led to a loss of control on the part of the Iveco truck.

The truck was said to have hit the tanker, resulting in a fire outbreak due to leakage.

“The Mazda bus got engulfed in the spark of the fire,” Okpe said, saying the burnt bodies were taken to Olabisi Onabanjo Teaching Hospital, Sagamu.

She added that some burnt vehicles were towed off the road, “leaving the tankers for the fuel content to be transloaded.”

While commiserating with the families of the victim during his visit to the scene, the Sector Commander of the FRSC in Ogun, Ahmed Umar, advised motorists to drive cautiously, obey traffic regulations and consider each other while driving.