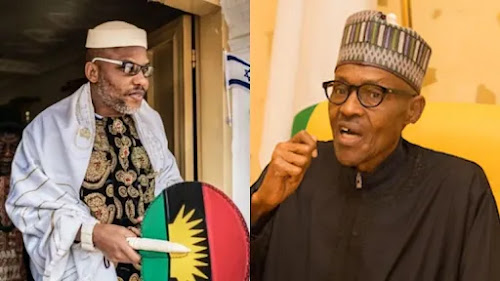 The South East Caucus in the Senate has called on the Federal Government to obey the ruling of the Appeal Court and discharge the leader of the Indigenous People of Biafra, IPOB, Mazi Nnamdi Kanu.

The caucus, comprising of eleven Senators, made the call in a statement issued and made available to newsmen in Abuja on Thursday.

The Appeal Court last week acquitted and discharged the IPOB leader of terrorism charges leveled against him by the Federal government.

However, Kanu who was re-arrested from Kenya in June 2021, is still in the custody of the Department of State Services as the Attorney-General of the Federation and Minister of Justice, Abubakar Malami insisted that he was only discharged but yet to be acquitted.

Following the refusal of the President Muhammadu Bubari-led government to release the separatist as ordered by the Appeal Court, the Senate caucus asked the president to keep the promise he earlier made to the Igbos and release Kanu.

“We should be mindful of our diversity and the strengths we as a country derive from there. This is the time to show magnanimity and statesmanship. The Appeal Court has provided the leeway for the authorities to walk the talk as ones desirous of preserving Nigerias unity and respect for her diversity.

“Accordingly, we as a Caucus and stakeholders in the Nigeria project appeal to Mr President, to remember the promise he made to a delegation of elders of Igboland sometime ago and release Nnamdi Kanu, especially now that the Appeal Court by that ruling removed the burden of interference from him. Going on Appeal would ultimately negate that kind gesture,” the caucus stated.