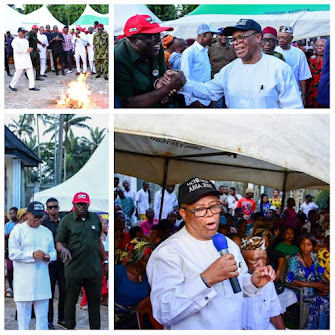 A former member of the National Assembly and chieftain of the All Progressives Congress (APC), Hon Chinenye Ike has returned to the ruling Peoples Democratic Party in Abia State.

He dumped the opposition APC for the PDP alongside hundreds of his loyalists across the electoral wards of Isiala Ngwa North and Isiala Ngwa South local government areas in Abia State.

Mr Ike, who represented Isiala Ngwa North and Isiala Ngwa South federal constituency in the House of Representatives between 2007 to 2015, said his return to the PDP was borne out of the love and conviction he had over the candidacy of Professor Uche Ikonne to deliver dividends of democracy to the Abia people.

“Being the best among his opponents in quality, qualification, administrative ability, leadership charisma and pragmatism, democracy inclination, policy orientation, wealth creation and growth and stability, I can tell you for free that no other has the strength to make Abia a centerpiece of development than Professor Uche Ikonne,” he posited.

Continuing, the ex-federal lawmaker called on all and sundry to embrace Ikonne for a better Abia, and expressed gratitude to the Governor of the State, Okezie Ikpeazu for the choice of Professor Ikonne to succeed him in 2023.

Ike also thanked the leadership of the PDP in Abia State for the opportunity to reunite with his main political family, assuring the State leadership of his unflinching support to build the party to an enviable height.

Speaking while welcoming the ex-Reps member, Ikonne assured him that all his rights and privileges will be given to him and his teeming supporters as they will not be discriminated against.

He described Hon Chinenye Ike as a veritable partner in progress and urged the people of the area to throw their weight behind him.

On his part, the State Deputy Chairman of the PDP, Chief Obinna Nwachukwu flanked by Isiala Ngwa North LGA party chairman, Elder Sam Esindu described Hon Chinenye Ike as a political Iroko with lots of class and clout, adding that his decision to return the Peoples Democratic Party has added credence towards the actualization of victory for Professor Uche Ikonne and other PDP candidates in next year’s general elections.

Nwachukwu assured the ex-parliamentarian and his teeming supporters of full inclusion in all programs and activities of the party in Isiala Ngwa North Local Government Area.

Saga Gist reports that highpoints of the event was the setting ablaze of APC brooms and membership cards belonging to the decampees, followed by the issuance of PDP membership cards.