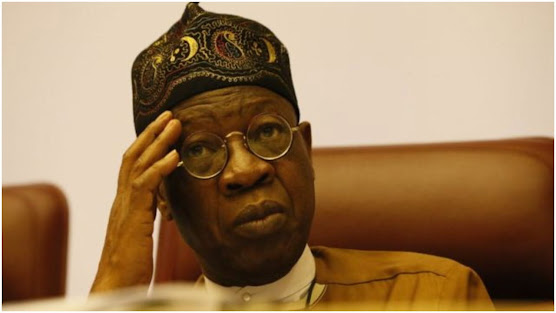 Human Rights Writers Association of Nigeria (HURIWA), on Wednesday, scolded the Minister of Information and Culture, Lai Mohammed, for labelling as unverified and misleading, the terror alerts by the United States and United Kingdom, warning of possible terrorist attacks in Abuja, and parts of the country.

HURIWA’s National Coordinator, Comrade Emmanuel Onwubiko, in a statement, said the minister has been churning out untrue propaganda about the security situation in the country under President Muhammadu Buhari.

The group said instead of coming up with superior, anti-terrorist strategies to forestall the imminent attacks by marauders on the nation’s political capital, the Buhari regime took a defensive position, faulting the intelligence of the UK and US embassies here in Nigeria, and giving false impression that all is well and that the country as a whole is well-secured.

Lai Mohammed was said to have delivered the disavowal at a ministerial session of the on-going UNESCO Media and Information Literacy Week in Abuja, saying such security alert was unnecessary as it has been “creating panic in the polity” and that “no one cared to find out about the authenticity of these alerts. They just published, got the benefit of massive clickbait, and damned the consequences”.

“Well, I can assure all that our military and other security agencies have continued to do everything possible to secure and protect Nigerians and foreigners living in Nigeria. Terrorists have been hard hit and put on the run. Bandits have been decimated and scattered.

“Our country is safer today than at any time in recent times, thanks to the sacrifice of our men and women in uniform,” the minister reportedly said.

However, HURIWA’s Onwubiko said, “It is of note that even the the Department of State Services and the Nigeria Police Force did not disregard the terror alerts by the UK and US but rather urged residents of the Abuja metropolis and Nigerians in general to remain calm.

“However, Minister Lai Mohammed came up with his usual misleading defence that Nigeria is more safer than before which is a blatant lie. The statistics of terrorist attacks this year alone showed that all the claims by Minister Mohammed and members of Buhari’s cabinet are falsehoods!

“Minister Lai Mohammed is characteristic manner has misled Nigerians for seven years lying that terrorists are defeated but terrorists went ahead to attack a Kaduna-Abuja train on March 28, 2022, killed scores, kidnapped over 100 passengers and held them hostages for over six months before their controversial release earlier in October.

“The same terrorists invaded the Kuje prison in Abuja on July 5, 2022 and freed over 600 inmates including hardened terrorists who are still at large. In August, in broad day light, terrorists ambushed and killed some personnel of the Presidential Guards Brigade in Abuja. The Owo massacre of over 40 Catholics during a Sunday service in Ondo State on June 5, 2022 is still fresh in the minds of their families and conscientious individuals.

“Under Buhari’s government in the last seven years, no fewer than 53,418 Nigerians lost their lives to terrorists and killer herdsmen between May 29, 2015 and October 15, 2022, according to a data by the Nigerian Security Tracker, a project of the Council on Foreign Relations of the United States of America.

“Yet, Minister Lai Mohammed has the effrontery to tell Nigerians that terrorists are technically defeated. The lies have failed and the Federal Government and its propaganda machineries should quit the lies and the façade.

“Buhari should cut short his South Korea trip and head to Abuja to coordinate Nigeria’s response to the terror alerts. The disregard and the downplaying of intelligence by the present government is at the core of our woes as a people. A responsible government should be preparing effective response and how to forestall terror attacks and not defending the indefensible!

“Like former Chief of Army Staff, Theophilus Yakubu Danjuma, said, Nigeria is being brought to ruin by heavily armed “useless” criminals and it may take self-defence to drive out country’s common “enemy” else Nigeria will be finished.”