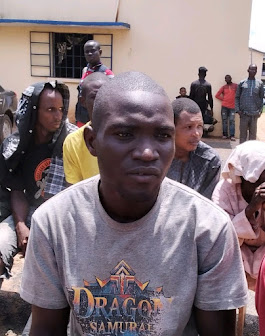 A man in Adamawa State, Benedict Haziel, has killed another man, identified simply as Lukas, over a girl named Blessing.

Haziel, who is currently being held by the police, admitted to stabbing Lukas in the buttocks, following which he bled to death.

Saga Gist gathered on Saturday that Blessing became Benedict’s fiancee after he paid N15,000 as part of the dowry to bring them together as man and wife.

Part of the story has it that Blessing, in a manner suggesting a lack of commitment to the planned marriage, kept seeing Lukas.

The suspect said, as part of his revelations to newsmen, that he had severally warned Lukas to keep off Blessing, but that he would not.

Benedict told newsmen at the weekend that on the fateful day last month that was to be the end of Lukas, he went to his residence when he heard that Blessing had gone there.

“On that fateful night, I trailed her to the residence of Lukas, with an intention of taking her to her parents,” Benedict said.

He added that Lukas engaged him in a fight on his arrival at the residence and that rather unconsciously, he used a knife in his possession and stabbed him.

“It was not my intention to kill him,” he said.