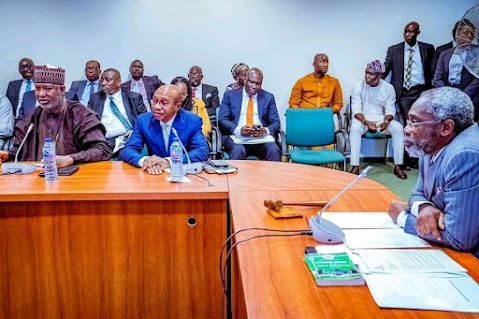 The Speaker of the House of Representatives, Femi Gbajabiamila has again met with the Academic Staff Union of Universities, ASUU, on the lingering payment issue between the union and the Federal Government.

Gbajabiamila disclosed this while sharing photos from the meeting on his Facebook page on Monday.

Recall that ASUU had suspended its eight-month strike after the Speaker of the House of Representatives mediated between it and the Federal Government.

The union, in its demands, kicked against the use of the Integrated Payroll and Personnel Information System (IPPIS) and asked the government to accept its own University Transparency and Accountability Solution, UTAS.

The Speaker mentioned that the purpose of the meeting was to reach an agreement on the implementation of the peculiarities of lecturers into the Integrated Personnel and Payroll Information System, saying it was a critical aspect of the agreement that led to the suspension of ASUU’s eight-month strike.

“The main issue for discussion today, which was one of the major areas of conflict, was the issue of the payment platform. Whether or not, or how to deal with the issue of UTAS as opposed to IPPIS.

“If you recollect on that issue, we did agree that we will marry both, whilst IPPIS will remain the platform, that the government will bring in the aspects and the areas under UTAS that are specific to the universities and assimilate those areas into IPPIS, I believe that was what was agreed by both sides when we had our last two meetings,” he said.

The Accountant-General of the Federation was also part of the meeting, while the National President, Prof Emmanuel Osodeke, led the ASUU delegation.