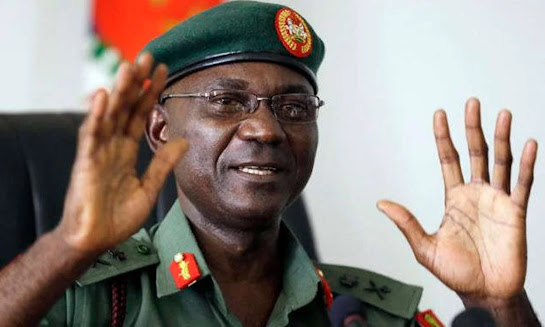 Former Army spokesperson, Major General John Enenche (Rtd.) has described the delisting of his name from the Presidential Advisory Council (PAC) of Labour Party (LP) as a good development, adding that he was not perturbed by the action.

He made the comment while granting an interview on ARISE TV, where he attributed the calls for his removal to lack of adequate information on the #EndSars incident.

He insisted on the need for “strategic information” to younger Nigerians on the October 11, 2020, alleged killing of unarmed protesters at the Lekki Toll Gate.

Recall that Enenche had been facing backlash for the alleged role he played during the EndSARS protest in Lagos.

The former Army Spokesperson, who said that he was encouraged by his exit from the campaign council, added that he “looks forward to a Nigeria that the economy will be good, a Nigeria that I only will not sit down and be getting phone calls for support, one that children can be empowered, one that there is hope, one also that the upcoming generation will know that you don’t need to know somebody to know somebody before you can go forward.”

While lamenting that corruption has since become a norm in Nigeria, the retired Major General said he was convinced to remain in the party and support its presidential and vice presidential candidates for the 2023 general elections.

The ex-Army image maker, equally buttressed reasons for pitching his tent with the opposition party, insisted that the LP flagbearer “stands out” among the major contenders for the post.

“17 years ago, I was a commanding officer at Onitsha before he became a governor. The moment he came, he came to the barracks and called. We sat down. He took the security of Anambra, and Onitsha in particular, very personally.

“Because as it were then, for about two or three weeks, everything was motionless. Nothing was happening in Onitsha town. His dedication to ensure that normalcy was restored, with other security agencies, to me, it goes to show that he can still replicate that in this country at a higher level.

“Secondly, I looked at a situation where somebody who has not been convicted of corruption or otherwise. I put all that together and said I’m convinced of him,” he said.

Enenche, who represented North-Central in the 1,234-man Obi-Datti campaign team, had claimed that videos showing the killing of #EndSARS protesters soldiers by the Nigerian Army in 2020 at Lekki Toll Gate were false.

He had also drawn condemnations when the retired Major General reportedly claimed that the Instagram live footage of DJ Switch was photoshopped.

The video of his claims surfaced again on Twitter recently, unearthing the fresh controversies against him.