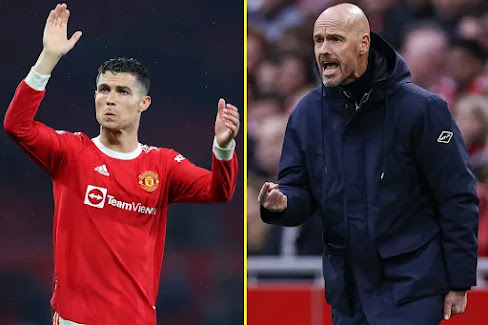 Manchester United forward, Cristiano Ronaldo, is not happy with manager Erik ten Hag and has questioned his “stubborn” methods, according to the UK Times.

Ronaldo has endured a miserable start to the campaign, scoring just one goal in 11 appearances in all competitions.

The 37-year-old has started just one of the Red Devils’ seven Premier League fixtures under Ten Hag, who has preferred Marcus Rashford and Anthony Martial.

Ronaldo is believed to be at “loggerheads” with the Dutchman, who he views as “stubborn” and “unnecessarily wedded” to the style of football he favoured at his former club Ajax.

The five-time Ballon d’Or winner is also said to be “furious” after Ten Hag claimed he did not bring him off the bench on during last weekend’s Manchester derby “out of respect”.

As United travel to Everton this Sunday, Ronaldo is again expected to start from the bench, after playing 90 minutes against Omonia Nikosia in the Europa League on Thursday night.