FEC fine-tunes 2023 budget proposals ahead of presentation to NASS 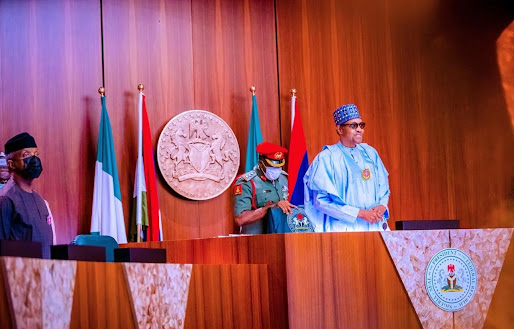 From all indications, the Federal Government has settled for early transmission of the 2023 budgetary appropriations to the National Assembly this week Friday.

Although the government still has a window of a few weeks to do the presentation, the budget proposal was thoroughly scrutinized at Wednesday’s Federal Executive Council (FEC), meeting chaired by President Muhammadu Buhari.

Special Adviser to the President on Media and Publicity, Femi Adesina, gave the inkling when he addressed State House Correspondents after the week’s meeting, but kept details of the actual figures settled for to his heart.

The Presidential spokesman jokingly said Wednesday’s FEC of today was a one-item-meeting.

He cleverly avoided disclosing if Council approved the budgetary figures exactly as proposed by the Ministry of Finance Budget and National Planning but noted that those required to fine-tune all its aspects were asked to make all necessary imputes and make it ready for the President’s presentation, scheduled for Friday.

“Good afternoon, colleagues and friends. It was virtually a one item for the Executive Council meeting in which the budget proposals for 2023 was presented and discussed, at length.

“That budget proposal will be taken to the National Assembly on Friday morning by Mr. President. So, it will not be proper to begin to discuss the contents of what will be officially presented on Friday.

“So, that is the information I have for us; that we won’t have the traditional briefing of what happened at the Council because it’s about a budget that will be presented on Friday morning. We’ll want to give the National Assembly that honour of receiving it first”, he said.

Asked when it would be appropriate for the Executive to present the Budget proposals to Nigerians and whether FEC gave it’s approval for the document to be presented to the National Assembly, the Presidential spokesman said the Minister of Finance, Budget and National Planning would give breakdown after the presentation had been down before the Legislature.

“You know, usually after the budget has been presented, then there will be a breakdown by the Minister of Finance. So, it will not be proper to begin to unveil what is being taken to the National Assembly on Friday” he said.

On whether it was approved by Council, he said “what was done was that it was discussed extensively and there were inputs, whichever input needs to be reflected before Friday will be done and then it will be presented to the National Assembly.

“So, all those things have been discussed and where they needed to tweak some of the projections, that has been done. The final approved cope will be presented by the President on Friday”, he said.

Asked about the status of the nation’s debt profile, he said “all those are things that are in the budget, it will not be fair. My brief is to let you know that the budget was discussed at length, all the details. But as a mark of respect for the National Assembly, which will receive it on Friday, it’s not prudent to begin to give out this information”.

Meanwhile, Adesina explained the reason why the FEC has not resumed full membership attendance, the way it was pre-COVID-19 era, saying this is being guided by the Presidential Committee on the pandemic.

“The Council Chambers is enclosed, there are, I think 42 ministers, by the time 42 ministers congregate there, along with other Cabinet Office staff, it’s becoming choked. Then it may not be advisable to have a full-blown physical meeting yet, but I’m sure we’ll get to that point”, he explained.

He also disclosed that the issue of 19 states without Resident Electoral Commissioners (REC) had come before the President and is receiving consideration.

Among those attending the meeting physically are Vice President Yemi Osinbajo; the Secretary to the Government of the Federation (SGF), Mr Boss Mustapha; Head of the Civil Service of the Federation, Dr Folasade Yemi-Esan; and the Chief of Staff to the President, Professor Ibrahim Gambari.

Other cabinet members participated virtually from their respective offices in Abuja.