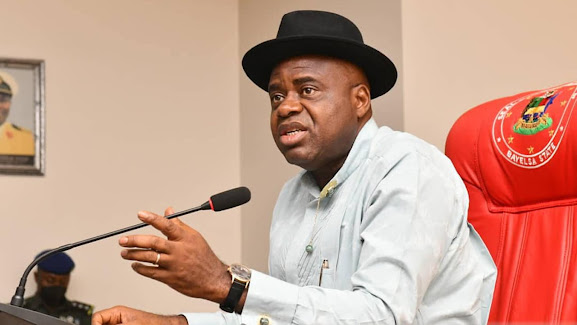 Bayelsa State Governor, Senator Douye Diri, has urged the Federal Government to declare a national emergency on the rampaging flood that has devastated lives and property in the state and other states in the country.

Senator Diri made the call at an emergency security council meeting in Government House, Yenagoa on Sunday.

He said the essence of the meeting was to brainstorm with heads of various security agencies to assess the situation holistically and seek ways to mitigate the impact of the natural disaster.

A statement by his Chief Press Secretary, Mr. Daniel Alabrah, on Sunday, quoted the governor as lamenting the magnitude of this year’s flooding, which he noted had surpassed that of 2012.

His words: “This year’s flooding has surpassed that of 2012, which is the highest we have witnessed so far. It has become a security emergency.”

According to Senator Diri, “Bayelsa is below sea level and when the flood comes, virtually everywhere is flooded. Even the Government House is being threatened.”

The state’s helmsman also noted that the flooding had severely impacted communities, homes and road infrastructure, which had resulted in the state being cut off from neighboring states of Rivers and Delta states.

“As we speak, the Academic Staff Union of Universities (ASUU) has called off its strike. But as universities are opening, our own state university cannot open because the only road linking the university has been broken into three parts.

“The only road that links Opokuma and Sabagreia in Kolokuma/Opokuma Local Government Area and the only one also connecting Sagbama to Ekeremor that is still under construction has been broken. There is hunger and palpable tension in the state.”

Diri cautioned those peddling false information and protesting over a water channel project undertaken by the state government at the Okutukutu and Opolo axis of Yenagoa, the state capital, to desist from the act.

He explained that the project was undertaken to mitigate the plight of residents around that area who were being affected by flood annually and not to satisfy any other interest.

“Let me also use this opportunity to clear the air on the issue of the Okutukutu and Opolo water channel project that was done last year by the state government to check flooding in that area.

“There is some ignorant narrative out there that it was done to protect the property of some people. The state government did not take that action for any particular interest. This is not the time to settle political scores but a time to be our brother’s keeper. We must all join hands to tackle this problem.”

Speaking at the end of the security council meeting, the Commissioner of Police, Bayelsa State Command, Mr Ben Okolo, said the council resolved that all security agencies be co-opted into the state flood committee to ensure that the relief materials get to the victims.

Mr. Okolo noted that security would be provided for displaced persons at their camps.

He also issued a travel advisory to travellers from Bayelsa to Rivers and Delta states to wait till the flood recedes as the road to both states had been cut off.

He said council advised petroleum marketers not to take undue advantage of the situation to make arbitrary increase in the price of their products just as he warned criminal elements not to cause more pain for people that are already displaced from their homes.