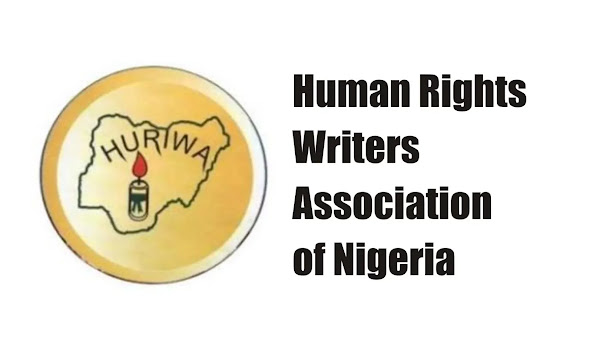 Human Rights Writers Association of Nigeria, HURIWA, has again cried out over the kidnap and eventual murder of a serving policeman, one Inspector Celestine Oriodovwe, by dare-devil gangs in Enugu State.

HURIWA said it has consistently condemned any coordinated assault and organised massacre of the men and officers of the Nigeria Police Force.

They pointed out that this is in the self-enlightened interests of President Muhammadu Buhari and the different layers of government, including the hierarchy of the Nigeria Police Force to work out and implement far-reaching strategies to minimise and possibly eliminate the phenomenon and, indeed, the epidemic of the coordinated assassination of the police operatives and the destruction of strategic national security assets of Nigeria.

“This was the reason we in HURIWA recently brought up the thematic issue of highlighting to the international community that indeed Police lives, military lives and the lives of everyone matters and no life should be wasted because LIFE IS SACRED and Section 33(1) of the Nigerian Constitution specifies that EXTRAJUDICIAL KILLINGS ARE UNLAWFUL,” the group said in a press conference addressed by its national coordinator, Emmanuel Onwubiko in Abuja on Sunday.

“This press conference became necessary, as the fact that this could happen to a serving Policeman on active duty, investigating the activity of some syndicates, may convey the idea that ordinary members of the public have lost their last line of defense against such inhumane degradation – the Police.

“Might we begin by extending our deepest appreciation to the Inspector General of Police, Usman Alkali Abba, who has graciously ordered the investigation of these incidents by relevant formations of the Nigeria Police Force? It’s a testament that police leadership will never forget their people who die in the line of duty serving Nigeria and fighting crimes.

“We are even more encouraged by the dedication and professionalism of the Assistant Inspector General of Police, Zone 13, Ukpo, Muri Umar Musa, and his investigating ‘A Team’.

“The fruit certainly doesn’t fall far from the tree. We are also reliably informed that some arrests have been made and that the investigation by the ‘Zone 13 A Team’ is progressing, despite influence peddling from very high quarters. Infact, this Press Conference is further necessitated by the continuous call from those quarters, attempting to apply enough pressure for the release of the arrested suspects.

“We can assure you this bit… HURIWA will be monitoring the progress of this investigation and will be updating members of the public at every juncture, just as we’re doing now.

“The fact that certain international organizations are relying on us to follow through on this, is enough motivation. It is said that evil prevails because good men refuse to do the right thing.

“We consider it morally injunctive to hone in on the kidnap and eventual murder of this Policeman because our collective apathy may have been the reason why the security situation degenerated in the first instance.

“The general observation is that since the arrest, about 8 days ago, of a handful of these dare-devil syndicate, who the murdered Inspector was investigating for robbery and other crimes, the crime rate in Enugu South metropolis and its environs, where these criminals have been holding sway, has significantly diminished.

“It is clear that the ripple effect of these arrests on the multiple layers of crimes committed by these criminals, especially on their victims across board, is remarkable. It is indeed our belief that solving the singular murder of Inspector Celestine Oriodovwe will also ensure justice in the murders of Comrade Kelvin Ezeoha and the final year,

“Business Administration student of the Enugu State University of Technology, Mr. Chidera Ogaba who were brutally murdered at an APC reconciliation meeting, in January this year, within the same catchment that these criminals have been operating.

“We are also sure it will provide insight and closure into the earlier murders of the trio of Nnaemeka Agbo, Nnamani Ikpa and Sunday Nnamani, who were presumably murdered by the de-facto leader of this syndicate- (name withheld) and declared wanted by the Nigeria Police Force.

“We find it a very compelling tale, that since 2015, up until date, neither the mastermind nor his murderous lieutenants have been brought to book.

“As a matter of fact, the audacity to not only kidnap and murder the Inspector, but to take his vehicle to the scene of crime, where the Inspector was investigating their criminal activities amounting to various degrees of assault, robbery and more, and to burn the vehicle there, was to send a message to their victims that their gang was untouchable and that no one can help them as victims.

“Let us categorically state that if the Inspector General of Police, does not investigate the highly placed supporters and enablers of these cold-blooded syndicate, responsible for most crimes in the area, who have assisted the syndicate evade justice for years, it will be deemed a tacit approval for the annihilation of innocent citizens within that catchment.

“We have also gathered that one of the alleged notable kingpins of the Eastern Security Network who remains on the Wanted List of the Police for crimes against the state, is a pivotal crew member of the referenced syndicate, that must be brought to justice.

“We are confident that apprehending these criminals will be the beginning of justice for all the victims of the Syndicate including those victims who are too afraid to come forward to tell their stories.

“We appeal to the Police hierarchy to reach out to the family of the slain Inspector and provide them with succour just the same way that the IGP has presented cheques worth several millions of Naira to many police operatives killed on the line of duty in Delta, Ebonyi, Imo States.

“The Inspector General of Police, Akali Baba Usman, had recently presented a cheque of N26,170,760 to families of deceased officers who died while in active service in Delta State.

“Presenting the cheque on behalf of IGP, the state Commissioner of Police, Muhammed Ali, said the cheques issued to the next of kin of seven deceased officers, were part of the IGP insurance welfare scheme.

“We will continue to do our part, as posterity beckons, holding all stakeholders to account.”