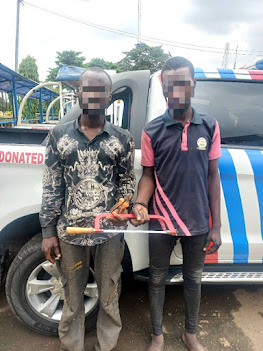 The suspects were nabbed while attempting to cut armoured cables in Ikoyi.

Wasiu Olainukan (25) and Habib Rasaq (30), in the early hours of the morning, excavated cables powering street lights in the area.

Preliminary investigations revealed that they were labourers working in Banana Island.

They duo were caught with a handsaw and cutting pliers at the time of their arrest.

They have been transferred to the State Criminal Investigation Department (SCID) in Panti.