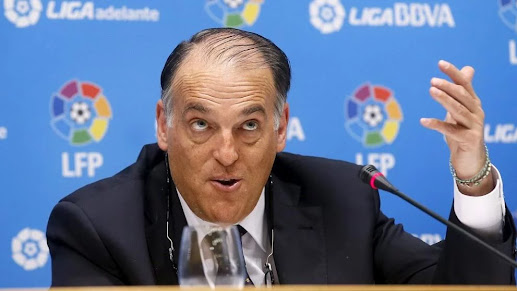 LaLiga President, Javier Tebas, has issued a warning to Barcelona ahead of the start of next season.

Barcelona were in a precarious financial position ahead of the start of the current season, and Tebas has stated that the Catalan club are in the same boat for the 2023-2024 season.

Speaking to Mundo Deportivo, Tebas said that Barcelona could face punishment if they don’t decrease their wage bill.

Discussing whether an early exit from the UEFA Champions League would impact Barcelona’s situation, Tebas said: “If they go out of the Champions League, they will have less income, but they will not have to pay bonuses. That will not change much.

“The levers have worked for them this season but not for the next one.

“They have to reduce salary mass, they cannot continue with more than 500 million euros. Because if not, next season, we will find the 1/4 rule for them again.”

Barcelona’s wage bill is currently €656million, meaning that the Blaugrana are over the €500million threshold by a long way.

They will therefore need to shift some big earners from their books before the start of next season.