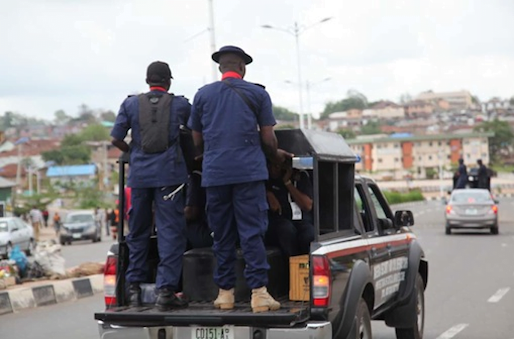 The Nigerian Security and Civil Defence Corps, NSCDC, has arrested a 30-year-old man, Shamsu Haruna, for allegedly defrauding his friends in the Jahun Local Government Area of Jigawa State.

NSCDC spokesman CSC Adamu Shehu stated this in a statement issued on Friday.

He said the suspect was arrested following a complaint lodged by one Abdussalam Yau and two others that the suspect conspired with other people and duped them of N2,816,500 to supply them with farm implements and fertilizer at a discounted rate.

Adam said the victims later realized it was a deception, and all efforts to retrieve their money failed, making them report the case to NSCDC in Jahun.

He said the suspect confessed to having committed the crime and named four others, including one Oga Muhammad, Oga Abdullahi, Abdurrahman, and Yusuf Hadejia, who are now on the run as his accomplices.

He explained that the suspects were accused of criminal conspiracy and cheating contrary to sections 96 and 320 and punishable under sections 97 and 322 of the penal code law of Jigawa State CAP P3 VOL. III Laws of Jigawa State 2012.

Adam said the command is making an effort to apprehend the other four suspects to bring them to book.