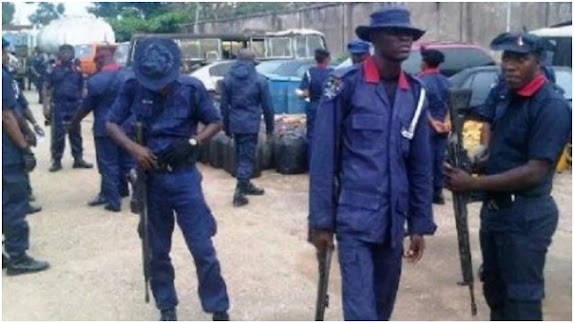 Some officials of the Nigeria Security and Civil Defence Corps (NSCDC), Ogun State Command, have cried out over what they tagged lopsided promotion and extortion.

The personnel called on the Minister of Interior, Rauf Aregbesola to help them from being stagnant in the same rank for many years, saying they were only promoted once since their enlistment into the corps in 2010.

It was gathered that about 150 officials of the corps in Ogun State are affected by the alleged lopsided promotion.

The aggrieved staff said only those who can afford to offer bribes to some top officials of the corps were being promoted.

Speaking anonymously over the fear of persecution, some of the officials alleged that, they were being extorted by the management of the NSCDC through payment of exorbitant fees for various promotion exercises, “but we are yet to be promoted.”

They appealed to Aregbesola to urgently address the delay in their promotion, saying those enlisted into the corps between 2012 and 2016 are now their seniors.

“We were enlisted into the NSCDC in 2010, although we were recruited with BSC but we were not placed on the normal rank which is Assistant Superintendent of Corps II (ASC II) Conpass 8, rather we were placed on Inspector of Corps Conpass 7.

”In 2011, the abnormalities were corrected as we were properly placed on Conpass 8. By 2014, we were already due for promotion and a promotion exercise was conducted. But, out of 100 per cent of our set that sat for the examination, less than 40 per cent were promoted. The excuse was that there was no availability of space.

“In the same year 2017, those recruited in 2010 and 2012 with Bsc on Conpass 8, respectively were advanced to Compass 9. They also backdated their advancement to 2013 and 2015 respectively, which placed them ahead of us.

“After almost eight years of stagnation, we were advanced with 2016 intakes to Conpass 9 without being backdated.

“Towards the end of 2020, the list of promotion to Compass 10 was released by NSCDC/CDCFIB during the tenure of our immediate past Commandant General, Abdullahi Mohammadu Gana, who rectified the abnormalities. Unfortunately, this was not implemented.

“In 2021, another promotion was conducted and the result was not pasted. 2012 and 2016 personnel recruited with BSc/HND are now ahead of us.

“We are appealing to CDCFIB under the leadership of our honourable Minister for Internal Affairs, Rauf Aregbesola, to assist us in rectifying the abnormalities so that the strength and morale of the affected officers can be boosted to discharge their duty effectively and efficiently,” they said.

Meanwhile, the NSCDC spokesman, Olusola Odumosu has denied the allegations, saying “the corps promotes officials based on merit and performance in their promotion examination.”

Odumosu said, “Every staff that is qualified is allowed to write an exam but if 100 people writes an exam and there are vacancies for only 20 personnel, you don’t expect the Commandant General to do magic.”