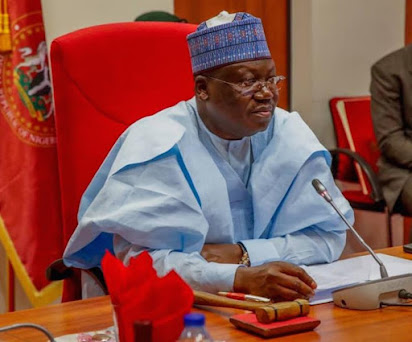 The President of the Senate, Ahmad Lawan on Tuesday said the conferment of national honours on him and his fellow awardees was an additional call to service.

Lawan who was conferred with the national honour of the Grand Commander of the Order of the Niger(GCON) spoke on behalf of the other 446 awardees at the event.

The Senate President said, “this award is an additional call to service. It is a call to duty and an invitation to realise that citizens’ efforts will not be in vain.

‘We are therefore inspired, motivated and admonished to keep up our inputs, as stakeholders in the building of a virile nation.

“This is why I call on awardees to be steadfast, considering the responsibility that comes with the honours.

“This obligation is one of leadership, more work and the provision of inspiration to others,” Lawan said.

Lawan thanked President Buhari for the honour done to them through the awards.

He said “the careful and painstaking selection is another evidence of Mr. President’s readiness to recognise excellence and service to nation-building, in line with his zeal to inspire citizens and to encourage as many others as possible for the future.

“The task of building a nation is obviously a continuous and collective effort. It is continuous because it is a never-ending process that needs increasing energy irrespective of the level of development that has been attained.

“It is also collective because it is a duty that desires all hands to be on deck, given the fact that it is a delicate balance at harmonizing groups towards emotional harmony, growth and development.

“The two dimensions involve the contributions of citizens who are supposed to be faithful, loyal and committed to the common goal. Amongst the citizens are leaders and drivers of the process, who should occasionally be identified for recognition.

“The recognition should however be thorough and laborious in what would reflect due service to the fatherland, as an encouragement to more work and as a motivation for others.

“Today’s event is more of an instalment in this process of acknowledgements, which Mr. President has methodically carried out.

“I, therefore, thank Mr. President on behalf of all the awardees, as we are most excited at the privilege of the prestigious honour.

“Be rest assured that we shall remain unwavering in our support for your efforts at transforming our dear fatherland, for the good of present and future generations.

“There is no gainsaying the fact that our country has witnessed many challenges in the last couple of years. The challenges have been changing and calling for urgent actions.

“They include insecurity, dwindling resources, climate change and the effect of the COVID-19 pandemic and have no doubt been distracting. Your administration has tackled them headlong.

“We are assured that lingering issues shall also be with in equal measure given the continued resolve of the present administration under the able leadership of Mr. President.”