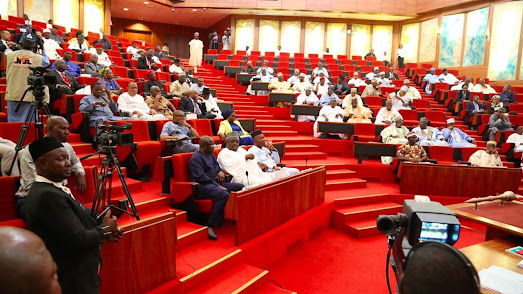 The Senate on Tuesday put on hold the consideration of the report of its Committee on Ethics, Privileges and Public Petitions.

The red chamber, however, declared that the nation’s secret police could place any citizen on its watchlist so as to continue to check crimes in the country.

But the suspension of the report followed observations by many senators that watch-listing citizens is one of the ways of monitoring crime suspects by security agencies.

The lawmakers argued that it would amount to meddlesomeness to direct the DSS to vacate the watch-list placed on the petitioner.

Chairman of the committee, Senator Ayo Akinyelure (PDP Ondo Central), presenting the report, said the DSS confirmed that it placed Ofehe on watch-list on June 3, 2009 following a request from the office of the NSA via a letter with reference number NSA/INT/366/S, dated May 28, 2009.

“In the latter, the petitioner was accused of being a self acclaimed activist and President/Founder of Hope For the Niger Delta Campaign, HNDC, who went to the Netherlands and sought for political asylum on the basis of a false claim that the Federal Government of Nigeria assassinated his mother in the course of the Niger Delta crisis.

“He was also accused of using his organisation to swindle money from the Dutch government and other environmental organisations under the guise of facilitating the peace process in the Niger Delta”.

Recall that the committee had in April this year directed the DSS and the Nigerian Intelligence Agency, NIA, to remove the name of Ofehe from their watchlist, just as it exonerated the HNDC founder of any wrongdoing.

Also, Ofehe, whose activities focus on environmental degradation in the oil-rich Niger Delta region, was placed on DSS and NIA watchlist in 2009 following his continued criticisms of the Shell multinational companies.