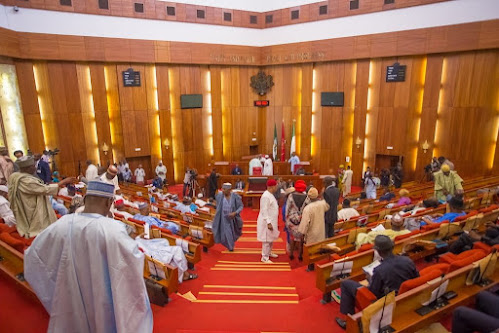 The Nigerian Senate on Wednesday commenced the legislative debate of the N20.507 trillion 2023 budget presented to the joint session of lawmakers by President Muhammadu Buhari last Friday.

The debate was kicked off on the order of the Senate President, Ahmad Ibrahim Lawan, after it had earlier been scheduled on the order paper.

Senators made their various contributions before it scaled second reading.

Senate President called for suspension of plenary until 15th November, 2022 to enable the various Committees embark on budget defence with relevant Ministries, Departments and Agencies (MDAs).

Leading the debate on the bill, the Senate Leader, Abdullahi Gobir said based on the budget fiscal assumptions and parameters, the current expenditure which is constituting over 43% of the total budget outlay is still too high.

According to Gobir, the current expenditure contained personnel costs, pensions, benefits and overheads that are expenses that are necessary for stabilising the government and the polity.

He said, “it is expected that the total operations of the Federal Government will result in a deficit of N10.78 trillion Naira. This represents 4.78% of estimated GDP, above the 3% threshold set by the Fiscal Responsibility Act 2007.

“Countries around the world have of necessity over-shoot their fiscal thresholds for their economies to survive and thrive.

“There is a need to exceed the threshold considering the administration’s collective desire to continue tackling the existential security challenges facing the country.

“It is important to point out that issues of revenue shortfall and meeting unexpected emergencies can only be tackled either by borrowing or cutting expenditure, shrinking the economy and government and social services, rationalisation, job cuts, etc.”