We’re not behind crisis in Ikire town – Osun OPC chieftain 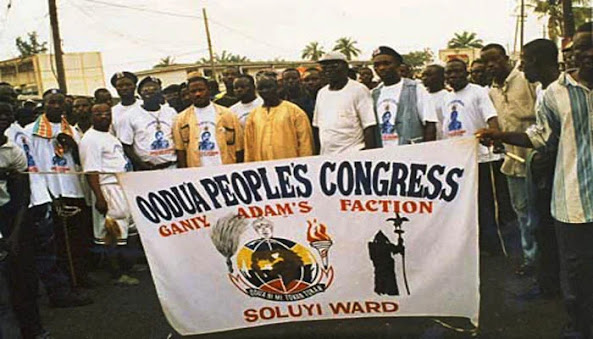 Antagonists of the Oodua Peoples Congress (OPC) in Ikire town, Osun State, have been warned to desist from spreading unfounded lies against members of the group.

They were also reminded that the OPC will not involve itself in acts capable of disrupting the peace in the town.

The Osun State Coordinator of the OPC, Adedeji Aladesawe, gave this warning against the backdrop of the rumours making the rounds that the OPC members were involved in the killing of a notorious gang leader, Ojo, that had been terrorising Ikire town for the past six years.

Aladesewa also dissociated the organisation from the prolonged crisis that has engulfed the town in recent days.

Giving account of the crisis that led to the murder of the kingpin, the OPC chieftain disclosed that the murder of Ojo was purely a result of a reprisal attack between members of the two dreaded secret cults that had been making life unbearable for the people of Ikire.

He also insisted that Ojo’s murder had nothing to do with members of OPC.

“I think it is very important to set the record straight in order to clear the air on the Ikire crisis. The crisis engulfing the ancient town in recent time was as a result of the rivalry between two notorious secret cult leaders. The late Sunbo Atobatele popularly called Small and Ojo.

“Sunbo was a former member of the OPC in Ikire but was dismissed from the group about six years ago as a result of his notorious activities.He was a leader of a cult, and had since become a torn in the flesh of the police by terrorizing the people. Atobatele was allegedly murdered about twenty days ago at Orita Merin in Ikire by suspected members of the rival cult led by Ojo.

“Sunbo’s family, according to my findings, reported the case to the police. Both the Area Commander and the Osun state commissioner of police were aware of the incident even as three persons have been arrested in connection with Sunbo’s murder. One Wale had been arrested on this crisis. So, it was this rivalry disposition that eventually led to the murder of Ojo by members of the late Sunbo Atobatele group.

“But since investigation is still ongoing, we will allow the police to do their job by getting to the root of the matter,” he said.

The Osun OPC chieftain warned persons spreading lies that it was the OPC under the leadership of Aare Gani Adams that killed Ojo to desist from spreading unfounded lies, adding that it was capable of jeopardising the ongoing investigation by the Osun State Police Command.