2023: Peter Obi’ll cool me down for better tomorrow – Ayo Adebanjo 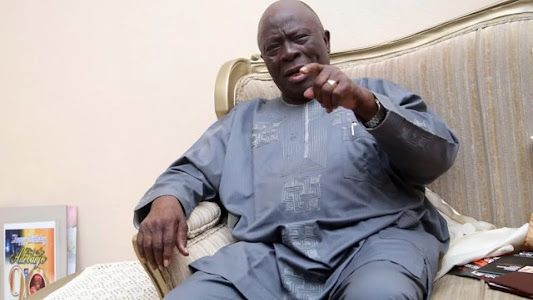 Elder statesman and leader of the Yoruba socio-political group, Afenifere, Chief Ayo Adebanjo has called on the supporters of Peter Obi, presidential candidate of the Labour Party, LP, to participate actively in making him the next President of Nigeria.

Adebanjo made the call during the launch of the 157-page book titled “The Challenges of Good Governance and Leadership in Nigeria: The Peter Obi effect Factor,” an event organised by the Alaigbo Development Foundation (ADF).

Recall that there had been other conflicting endorsements from Reuben Fasoranti, the former national leader of Afenifere, for the candidate of the All Progressives Congress, Bola Tinubu.

Saga Gist reported Fasoranti’s endorsement of Tinubu, when he announced that he had thrown his weight behind Tinubu’s 2023 bid and blessed him.

However, Adebanjo has repeatedly echoed his support for Obi.

“It is no longer a tea party. Those who are there do not want to leave, but we will kick them out. I want your action, don’t let the opponents intimidate you.

“I have found in Peter Obi, a person that would cool me down for a better tomorrow. Your future is in your hands, and your positive action will make Peter Obi the next President,” he said.

Meanwhile, Uzodinma Nwala, the ADF national president and chief host of the event, said Obi’s humility and good works inspired the book launched in his honour.